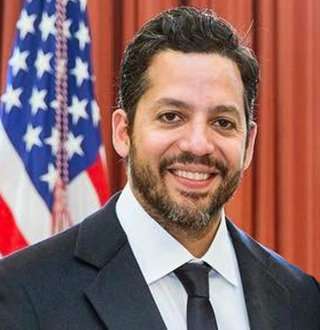 For David Blaine, everything is just a play, whether that be stopping a bullet in his mouth or living on an ice block for days without food all in front of the public eyes. However, one thing the magician can't seem to entertain the idea of displaying his personal life to the public. He is tricky when it comes to sealing his the details.

David Blaine is an American magician, illusionist and endurance artist, who first rose to fame after being buried alive for more than a week and surprisingly coming out alive. The magician has also been a part of various TV shows including  David Blaine: Real or Magic and David Blaine: What Is Magic?

It's Magic: David Blaine pierces his biceps in front of an amazed Ricky Gervais in 2017 (Photo: magiciansmag.com)

There are countable accolades regarding his elite career. In 2002 he published a book; Mysterious Stranger: A Book of Magic a collection of his memoirs and a guide to magic tricks. Similarly, his endurance tests also kept getting harder and harder.

In 2004 he spent 44 days caged inside a transparent Plexiglas case overlooking the Thames in London surviving just on water. And in April 2008, he broke the Guinness World Record for static apnea, after holding his breath underwater for 17 minutes 4-1/2 seconds.

The trickster was born on 4 April 1973, in Brooklyn to war veteran father and a schoolteacher mother. He was raised up only by his mother and left his house in his late teens to make it big.

As a kid, David saw a magic show when he was just four years of age, which made a lasting impression on his mind and has been fascinated with magic ever since. After moving to the Big Apple as a 17-year-old, the illusionist began his first foray into the realm of trickery and started doing magic on the street. His first TV appearance came in 1997 when he did David Blaine: Street Magic for the ABC.

By 2000 his charm had grown multiple folds after appearing in numerous TV shows leading him to be named the Hottest man in the magic of 2000. His feats include being buried alive in a 3-ton water-filled tank for seven days, living in an icebox for 63 hours with little clothes, and standing on a 100-foot pillar for 35 hours.

What Is David Blaine's Net Worth?

The acclaimed magician was on the Summer and Spring Tour, starting from 6 May 2018. The tour consisted of more than 25 stops around the country before concluding in his hometown on 14 July 2018.

Having spent more than two decades of his life in fantasy, David has earned not only name and fame but also a considerable net worth. He is one of the wealthiest magicians and boasts a whopping net worth of $12 million.

During his career, he has not only earned plaudits but also attracted controversies. He was accused by model Natasha Prince of raping her in 2017. David pleaded his innocence, and the case is due to be heard in 2018, with the verdict also likely to come in 2018.

Poor David! Dated Many But Wife Nowhere In Destiny

Apart from his insane magic tricks and unbelievable feats he is also known for his colorful dating history which has seen him linked with plenty of women.

In the 90s after Davis's star began to rise, he hit the news after his relationship with singer-songwriter Fiona Apple surfaced. The couple dated for a couple of years before separating after David was alleged to have a hookup with Madonna.

He was also linked with models Bijou Philips, Manon von Gerkan, Josie Maran, Mallory Snyder, and Lonneke Engel at various points of time in the noughties. After brief flings with numerous women, he seemed to have finally settled with  French model and actress Alizee Guinochet.

The magician was reported to be engaged to be married to the French actress. What's more, he welcomed his daughter Dessa, on 27 January 2011, with his wife-to-be. However, before the couple could get married to be pronounced husband and wife, they split after David's infidelity with another girl surfaced. Despite pleading his innocence, he could not save the relationship leading to their separation.

As of now, he is single as of 2018 and enjoying his life with his daughter, and touring the country with his love, 'Magic.'

David Is Happily Single With Daughter In 2018

Despite his split with his fiancee, David is very close to his daughter and spends ample amount of time with her. In 2012 he expressed his desire to keep his daughter protected and shared that he would never want his daughter to follow in his footsteps.

Furthermore, his daughter is the feature of his Instagram regularly making appearances on his walls, whether that be swimming with the dolphins or just spending casual time with her. It's likely that David loves spending quality time with his daughter whenever he gets a chance.

No matter how strongly David wills to keep his personal matters to himself, they find a way out to land into the public eye. He must be exhausted by now. But turned out, there is no way he gets away in silence after spending a relaxing time with his sexy supermodel friend, Naomi Campbell.

The pair of magician and supermodel were spotted hanging out together on a luxury yatch along the coastline of St-Tropez in August 2018. Their get together would have long burned down the headlined as a suspected date if one of Blaine's representatives hadn't spilled for the matter with a revelation that their relationship is anything but romantic.

Naomi and David are not dating. They have been great friends for many years now, but nothing more than that.

Twenty years of friendship definitely gives them the freedom to spend time together every now and then. But what provokes the enthusiasm is their belonging to utterly different backgrounds. It's hard to believe that the duo of supermodel and magician has no intention of upgrading their relation after 20 years of mutual friendship.