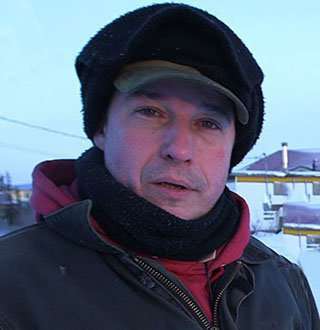 Chip Hailstone is an epitome of a survivor, a fighter, someone who willingly confronts the harsh obstacles to emerge stronger on the other side. One time though, his never say die attitude went a tad too far and landed him in hot soup leaving him 15 months in jail.

The Alaska native and his wife Agnes are the stars of National Geographic documentary Life Below Zero, which follows families living in Alaska, as they go on with their daily battles against the freezing wilderness and unforgiving nature of Alaska.

Life Below Zero: Nat-Geo captures the struggles of people living in Alaska against the harsh arctic weather (Published on 19 January 2017)

The Hailstones, one of the families followed in the Life Below Zero, along with Aikens family headed by Sue Aikens, venture north every year before the arrival of winter to hunt and gather resources for their survival in the coming winter.

Born in Kalispell, Montana to Daniel Franklin Hailstone and Mary Lois Hailstone, in the year 1969, Edward "Chip" Hailstone moved to Noorvik, an Alaskan city beyond the Arctic Circle, at the age of 19. It was in Noorvik he met, befriended, and later married, Agnes, a native Alaskan from Inupiat.

The couple lives in Noorvik with their five daughters and two sons from Agnes' previous relationship.

The reality star, aged 47, and his wife who is three years his junior share a combined net worth of $100 thousand, thanks to the Nat-Geo’s extremely popular Life Below Zero. The star, however, could be suffering from dwindling net worth after his crime.

Life Below Zero's Chip In Jail--What Was His Crime

It is probably a requirement for star hunting couple to be ferocious to survive under the conditions they live, but now they have to face the consequences as they took their aggressiveness required in the wild to the human society and to the men of law.

Things started in 2011 when Chip’s younger step-son, Jonathan and eldest daughter Tinmiaq were involved in a brutal fight, with plenty of weapons on the show.

The police, trying to placate the situation, arrested the people involved in the fight including Chip’s step-son. In retaliation, the angry couple stormed the Trooper’s station claiming that their son was innocent, causing a little bit of struggle.

The couple and their kids were interrogated and one of the interrogating officers Christopher Bitz had to confront Tinmiaq physically as he felt she was about to abuse him physically.

Chip, his ego bruised, tried to get the upper hand in the situation by accusing one of the officers, Christopher Bitz, of assaulting his daughter. He also sought a restraining order against Bitz, claiming to the Alaskan magistrate that the officer could physically abuse his daughter.

The situation, however, didn’t go as Chip must have planned as the officer deployed to investigate the accusations gave his report in favor of the Bitz. Chip was subsequently charged with perjury, a crime of giving false statements under oath.

The court found Chip guilty of perjury, having provided the false statements with the intentions of convicting somebody. The reality star, who was previously given a three year probation period, was sentenced jail time by the court.

Chip, albeit in futility, appealed the decision with his attorney Glenda Kerry claiming that there isn’t sufficient evidence for convicting him of perjury. Hailstone was sentenced to serve 15 months in jail, by the court. Various wiki sites have claimed that Chip was incarcerated in July 2017 and will serve his full time in jail, before joining up with his family in Life Below Zero. The perk of felon means that now Chip will have to hunt without a gun as it is illegal for a convicted felon to keep possession of a firearm.

Having had to conquer brutal Alaska, Chip could be feeling his jail sentence to be the biggest challenge he has ever faced. But one thing is for sure; the born winner will want to put this whole ordeal behind him as soon as possible and join his wife in Life Below Zero, doing what he does best--surviving!