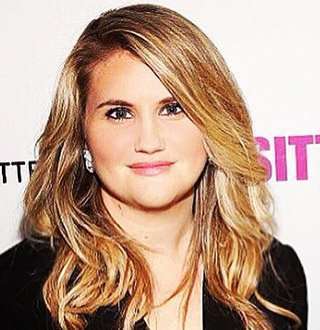 American comedian, Jillian Bell used to mention her pet as the boyfriend, but she later revealed in an interview that she had a boyfriend and the romance with him was 'extremely sexual.'

The Las Vegas Native is best known for the recurring role of the clumsy executive assistant, Jillian Belk on Comedy Central's show, Workaholics, aired from 2011 to 2017. She is the actor, creator, and writer of a sitcom, Idiotsitter,  which airs on Comedy Central since 2016.

Embarrassing To Next Level: Jillian Bell talks about her encounter with Justin Timberlake at SNL on Conan on TBS (Published on 26 January 2016)

She made a television debut by portraying the role of Denise in the movie, Crossbows & Mustaches in 2006. Her first work included comedy film Bridesmaids in 2011.

The talented comedian was born as Jillian Leigh Bell on 25 April 1984 to parents; Ron and Tanzy Bell. She pursued her high school education from Bishop Gorman High School in 2002.

See Also: Tisha Campbell Facts: From Parents And Siblings To Shocking Net Worth

She is a young daughter in the family and has an elder sister, Breanna. She loves her family which is demonstrated by her various Instagram posts.

Mother is everything: Jillian displays love towards her mother through a childhood picture on Instagram in May 2018. (Photo: Jillian Bell's Instagram)

Moreover, she is close to her sister and shares the moments with her on her Instagram. Recently, she wished on her sister's birthday in March 2018.

You May Also Like: Candace Bailey After Divorce With Husband; Married Again, Ecstatic In Family Affair

She showed her versatility in acting, appearing as a villain in 2017 comedy film, Rough Night. She has also lent her voice to various movies and series such as Gravity Falls (2014) SuperMansion (2015) and The Angry Birds Movie (2016).

Jillian has been entertaining the folks through her comedy act for more than a decade. For her enthralling acting performance, she was nominated for a Primetime Emmy Awards in 2010 and for two MTV Movie Awards in 2015.

Her remarkable career has given not only her popularity but also striking paychecks that contributes her net worth. Working in the numerous movies and series, she has amassed the remarkable amount of income.

Currently, she enjoys an extravagant lifestyle with a significant net worth of $2 Million.

It was announced in July 2018 that Jillian would be starring opposite American actor Ben Schwartz in the premium cable network's comedy pilot The Wrong Mans.

The Wrong Mans is an action-comedy about two ordinary office workers whose menial existence turns upside-down by an unexpected phone call and a case of mistaken identity. They are threatened by these words from the other side of the call, 'If you are not here by 5 o'clock, we will kill your wife.'

Being the only people who can actually help, the two unlikely characters must figure out their inner bravery in their quest to save not just themselves, but their loved ones alongside their whole town.

The comedy pilot is produced by JJ Abrams and James Corden and is based on the BBC comedy of the same name created by and starring James and Matthew Baynton. Jillian is playing as Anne, based on James' role of Phil in the original.

Her character works with Sam (Ben) and is a deluded fantasist living with her mother and has such an empty life that she leaps at the opportunity to join San to save the kidnapped woman.

Jillian showed her excitement to be starring in the series as she shared the news on her Instagram as well.

Feels No Pressure On Career By Weight Gain

Jillian has a curvy body, and she feels challenging in her career as it specifically deals with weight and women’s perception of shapes. But that is only in the case of her career as she has not felt any pressure to lose weight outside the screen.

As many actresses have even done fat suits to perpetuate myths about fat people, Jillian is also one of them. Her fat figure even synchronized her act as the villain in the comedy movie, Rough Night.

Boyfriend But Not Who Everyone Expects

Talking about her dating status, Jillian has not been publicly spotted romancing with her boyfriend. She used to make several tweets with a picture of her dog and mention it as her boyfriend.

In 2012's Valentine's day, she made a tweet stating that it is the day when your dog chews up your favorite pair of shoes.

After almost four years, Jillian opened up about her possible future husband in an interview with Larry King in January 2016.

Talking in an interview, she revealed that her boyfriend name is Alex Hanloff, who is a tour guide and takes tour groups all over America and is fluent in speaking French.

Moreover, she insisted that she was pretty serious about him, and a relationship with him is ‘extremely sexual,’ but she barely sees him as he frequently goes on tours.

Although she publically opened about her relationship with her boyfriend, she has not flaunted their romance in her social sites yet.

Similarly, she has not revealed her plans of getting married to her boyfriend so far.