Jane Pauley Up Close: Family Life With Husband And Children At Age 67 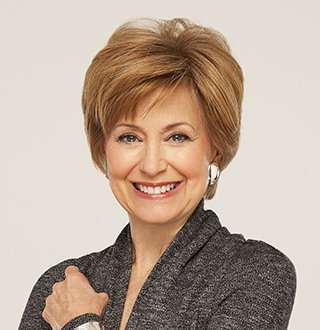 American television journalist Jane Pauley had to juggle between three roles, a working lady, a lovely wife, and a dedicated mother. Not only did she fulfill three roles with distinction, but also continues to defy the odds at a ripe old age nearing 70.

The Indianapolis native is famously recognized as the correspondent and host for the CBS Sunday Morning. Before CBS she had a 13-year stint with NBC hosting the NBC Today. The beautiful TV presenter was also listed as one of the 50 most beautiful people of the world by the People Magazine in 1990. 67-year-old Jane Pauley initiated her journaling career as a reporter to the then-CBS affiliate WISH-TV based in Indianapolis in 1972.

In 1975 she joined NBC affiliate WMAQ-TV and became Chicago's first woman to anchor on a significant evening newscast. At the age of 25, she was already chosen to host the widely popular TV program Today show.

Jane worked in the Today show for 13 years, before moving on to other shows of the Channel. After leaving the Today Show, she co-anchored NBC's Dateline NBC from 1992 to 2003 before surprising everyone by deciding to leave the show in 2003.

And in 2004 she hosted talk show The Jane Pauley Show which was syndicated all over the US by NBC Universal.

In the same year, Jane released her best selling memoir Skywriting: A Life Out of the Blue where she opened up about her fight against bipolar disorder and several bouts of depression she suffered during her career.

In April 2014, she joined CBS Sunday Morning and started contributing as host and correspondent. On 7th January 2014, Jane also released a self-help book named 'Your Life Calling: Reimagining the Rest of Your Life' where she talked about people who, after average age 50, reimagine or reinvent their lives.

Jane's time in the entertainment industry has seen her felicitated with numerous awards and honors. She has been featured in various A-list magazines and has been an inspiration for all the working class women having successfully juggled between her personal life and children.

And being one of the best-known faces in the history of TV she has been able to command a handsome salary with each shows she has done. She enjoys an astonishing net worth of $40 million earned through years of dedicated service to provide viewers with the accurate information and news.

The skilled interviewer replaced Charles Osgood for CBS Sunday Morning marking a legacy as the third host for the show since its commencement. She didn't take long to build herself a spot in the channel through her excellent work.

Jane landed in CBS at just the right time as she got an opportunity of being a part of the network's 40 years completion celebration. The TV family celebrated the 40th anniversary of the show on 10 September 2018 by featuring influential individuals such as Ralph Lauren, Robert Redford, Chrissy Teigen, and John Legend. Jane reflected upon their struggling stories in the primetime special Sunday's Best: Celebrating 40 Years of CBS Sunday Morning. As long as the health remains in favor of the aging woman, she would be hosting many anniversary specials to come in the future.

Out of the TV screen, Jane lives a blissful married life with her husband, Garry Trudeau, who happens to be a famous cartoonist for the Pulitzer Prize-winning cartoon "Doonesbury."

Jane and her husband Garry got into wedlock on 14th June 1980. The couple since then has been a constant rock for each other helping in their tough times. They have been happily married for more than 38 years and have a large family of three children to show for it.

Jane Pauley's Once Left Her Job For Children

Three years after their wedding in 1980, the couple welcomed their first children, twins Ross and Rachel.

Later in 1986, while Jane was working for the NBC's talk show, "Today," she gave birth to their third child, Thomas Moore Trudeau. After three months of maternity leave, Jane returned to the show as a co-host and continued her work.

However, she felt guilty about leaving her young ones for her job. She even talked about her guilt in the interview with the People on 27th October 1986.

There she revealed that she and her husband Garry were discerning the responsibility of having a third child. Despite the challenges of the hectic schedule, the pair worked together and did their best to raise their kids right. However, amid raising the kids and balancing work, Jane felt the pressure of having to compromise her professional ambitions or her family. So, she let go of her dedication to her profession and quit the job to give her time to her family members.

Jane Pauley and Garry Trudeau's Children Are All Grown Up Now

In June 2014, her son, Thomas married Juliana Margaret Thorsten. Her daughter, Rachel also got married to Robert Gary Steinsdoerfer in November of the same year.

As for now, Jane works as an anchor for the CBS' Sunday Morning and enjoys her life with her loving husband and children. Moreover, she and her partner are happily settled in their home in Rockland County, which they bought in March 2016.

And her dedication towards her work and family remains the same at age 67, as it was when she started as a young and energetic 22-year-old.