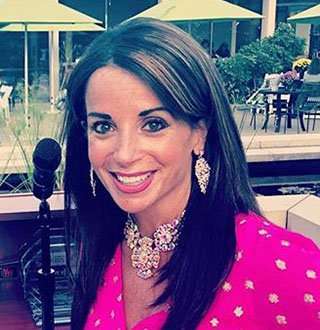 For WKYC’s meteorologist, Hollie Strano the vows of forever was shattered; once married with two kids, she broke up with her first husband. After the broken marriage, she found love once again. But did this marriage lasts forever, or it too ended up shattered as well. Let’s find out!

The Cleveland native is an American journalist who is best known as WKYC's morning show meteorologist and host of the WKYC’s LIVE on Lakeside. You can watch the meteorologist at 4:30 am every day on a weekday morning and as the host of LIVE on Lakeside at 11 am on weekdays.

She is also listed as Cleveland’s Most Interesting People by Cleveland Magazine in 2005.

Born in 1972 at Cleveland, Ohio Hollie Strano celebrates her birthday every year on 3 December. The 5’3 inches tall (height) meterologist was born in a family of five with her parents, younger sister Stephanie and younger brother Mike. She is very close with her family and often mentions them in her social media post.

Moving onto her education, Strano attended Jesuit Catholic University pursuing a degree in meteorology after high school. After graduation, she went to Mississippi State University where she earned her credibility as a certified meteorologist after receiving the National Weather Association Seal.

Soon after earning the credibility, the bubbly and darling personality joined NBC affiliated WKYC tv as an on-air weather reporter. For her job at WKYC, she has to wake up early at 1 am and describes it as her favourite time of the day. What a dedicated woman!

But she also admitted that it does leave her sleep deprived. And that is the reason why WKYC moved her show LIVE on Lakeside (LOL) an hour up at 11 am to ease up her hectic morning schedule.

She is the host of her own WKYC’s 90 minutes show LIVE on the lakeside which discusses various issues related with the people of Cleveland. She hosts the show alongside WKYC Meteorologist Michael Estime, and other WKYC members Alexa Lee and Joe Cronauer.

You May Also Want To Know: Find Out Betsy Kling Salary At Age 43 & Know About Her Husband & Family

The WKYC’s LOL is so well loved amongst the audiences that it even qualifies to compete against famous shows like ABC’s The View, and CBS’s The Price Is Right.

As a staple member of WKYC, as a meteorologist, she earns an estimated average salary of $65,453. She even earns a good amount of salary as the WKYC’s host for its popular show.

The gorgeous Hollie was married to her husband Brian and shared two children Jessica (2005) and Grady Toohig (2006). With a lovely tradition of celebrating Christmas together; Irish supper at Brian’s mom’s house and Italian supper at her dad’s house, the couple were blessed with a big family.

Find Out: What Is Kimi Evans Age? Is She Married? Never Known Facts Revealed

But sadly the tradition couldn’t go on as the couple put a full stop to their married life after the divorce in 2011 for some unknown reason.

After the broken vows from her first wedding, she found a special someone once again to renew those vows with her second husband, Alex Giangreco.

The couple met while Hollie was in a vacation at Florida in 2010 and after exchanging phone numbers at the Casablanca, they went on a date to Aruba Beach.

After years of dating, they finally engaged in a bond of marriage in 2014 at a simple wedding ceremony in Pompano Beach, Florida. She then changed her surname to Giangreco after the marriage. 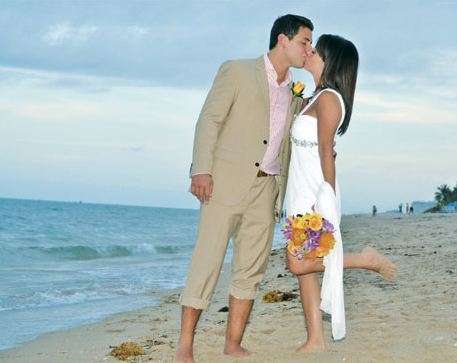 Wedding On The Beach: Hollie Strano exchange kisses with her husband Alex on their special day (Photo: Ocean View)

Sadly, this time also her vows again was left broken, and the journalist went back to the surname Strano. She confirmed the divorce with her second husband on Twitter in 2017.

But despite the broken marriages, she has maintained a loving relationship with her kids who have been by her side through it all!