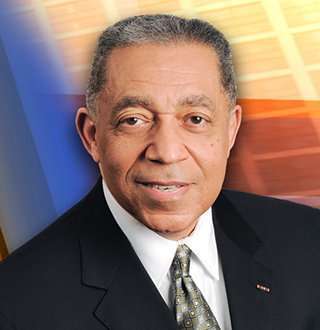 American journalist Leon Bibb didn't enhance his success alone, as he had his wife by his side to support him and stand by him during tough times.

Leon Bibb is famously known for being Ohio's first black prime news anchor. The history maker is one of the finest journalists of any color serving today.

Along with decades of contribution to the reporting world, Leon has also served the country as a veteran U.S army and earned a Bronze Star for his service during the Vietnam War.

After graduation, the 73-year-old broadcaster worked as a newspaper reporter at The Plain Dealer, and after a year of working at WTOL-TV (Toledo), he got a new position at WCMH-TV in Columbus.

Eventually, after working for eight longs years in the WCMH, Leon got a job at the WKYC News Channel 3 in Cleveland, Ohio, which pays the anchor with an average salary of $37,896. But in 1995, overcoming the struggles regarding his race, Leon joined the WEWS Channel 5.

Earlier on 1st August  2017, Leon took the retirement from the anchor desk of Channel 5, but still works there as a host for WEWS Kaleidoscope and often shows up as a commentator for major breaking news stories.

On 11 September 2018, Leon Bibb reported on what a couple of nuns saw in the sky on 9/11. Leon started the report on a dramatic note saying that the times were peaceful at Our Lady of Lourdes Shrine in Cleveland, but the peace was shattered on 11 September 2001.

Leon reported on the 17th anniversary of the tragic incident where thousands of people died. He met two nuns who witnessed horror when they saw the scheduled cross-country United Flight 93 went terribly off-schedule.

Terrorism was within sight of Cleveland's Lady of Lourdes Shrine when the jetliner crashed in Pennsylvania. The nuns knew terrorists had already seized control from the pilots of three planes from the television news coverage.

Leon ended his report by stating that the women of peace were praying that day as they do today and will continue to do so as the lost lives sought peace.

Alabama-born yet Cleveland-reared reporter Leon Bibb lives a happy life with his long-term wife, Marguerite Bibb. According to the first-hand narrated thesis of Brianna L. Savoca submitted to the Ohio University on June 10, 2010, Leon married Marguerite, his college sweetheart, while he was a military army stationed at the Fort Benning, Georgia.

During the ten-day leave from the workplace on the occasion of Christmas, Leon called his love and asked to marry while Marguerite answered saying that she had already got the wedding dress ready.

The couple finally tied the wedlocks on 23rd December 1966, two days before Christmas. Afterward, Leon completed his training in Oklahoma and went to the Vietnam battlefields during the summer of 1967. Commemorating the memories during an interview with the News5 Cleveland on 11th November 2016, Leon stated that he and his wife were holding hands symbolically while he was in the war and Marguerite at home, praying for Leon's safety.

When Leon completed his service in Vietnam, Leon returned home to his family and started to study for his graduation along with his wife. While everyone in the family had doubts about the choice of Leon to be a journalist, Leon's wife always believed in him.

Interestingly, Leon started to work as a graduate assistant at WBGU television at Bowling Green and soon became the occasional sportscaster for WBGU-TV

Later in June 1970, Leon landed in reporting position for the WTOL-TV, the CBS affiliate in Toledo, Ohio, and just after four months, he and his wife welcomed their first child, Jennifer on 28th September 1970. Their second child, Alison was born on 8th January 1977 after Leon got hired at WCMH in Colombus.