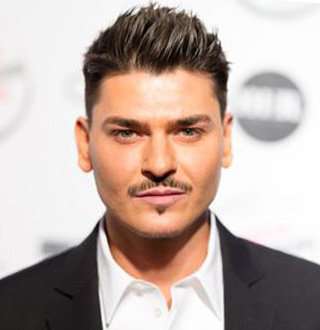 Makeup artist Mario Dedivanovic grasped his dream of getting into the make up industry, but that didn't fail to bring him within some whirling rumors of him being gay.

Mario Dedivanovic is one of the most happening makeup artists in the Tinseltown with a celebrity clientele list full of Hollywood A-listers including the Kardashians. He is also known for his appearance as a judge on the Lifetime TV series, Glam Masters.

Here are some lesser known wikis on Mario’s age, net worth, family, his make up career and his sexual preference for a partner.

Born on 1 October 1983, Mario Dedivanovic was raised in Montenegro alongside his sister and brother. As a young boy, Mario loved to fabricate himself heavily with perfumes and other fragrances. He got his first job in the fragrance section at Sephora, not so surprising.

You May Also Like: Manny MUA Empowering 'Gay Story' | Net Worth & Height Details At Age 27

But the 35-year-old artist had his interest curved to another direction as a woman asked him to help her choose a lipstick and Mario became obsessed with makeup. He worked on a freelance basis for the Fox News, getting their anchors ready for their appearances.

Not many women trusted him to do their makeup until they put Julie Banderas on his chair and who kickstarted his make up career. After Julie, he did make up for Megyn Kelly and Julie Banderas, who after being impressed by his work requested for him every week. It wasn’t long before he started the IRL makeup tutorial, Master Class that began with just 20 attendees.

Mario’s clients today include Kim Kardashian, Demi Lovato, Ariana Grande, Chrissy Teigen, Emily Ratajkowski, and Kate Bosworth. He even won Best Celebrity Makeup Artist at the 2017 American Influencer Awards. The makeup artist shares a close bond with Kim Kardashian as very close friends and the two are often making fun of each other. They even launched their collaborated makeup line, KKW x Mario.

Mario hasn’t revealed his pay but the top makeup artists have the salary of more than $124,960, and since Mario is a regular for Kim and other celebrities, there’s no doubt that he earns more than that. Moreover, there have been unconfirmed reports of him charging more than $5,000 per session.

With such a huge paycheck earned per session, it would come as little surprise if his net worth is calculated in millions.

Mario is a huge family person and he’s especially close to his mother. Ironically, his mother doesn’t wear a drop of makeup. But Mario still loves her more than makeup and he even bought her a $6,300 Cartier love bracelet on Mother’s Day.

He has mentioned one too many times on his social media sites that he won’t stop spoiling his mother anytime soon. Mario even teased to glam his mother up in makeup. Family Time: Mario posts a picture with his mother wishing her a happy birthday on Instagram on 16 November 2015 (Photo: Mario Dedivanovic’s Instagram)

Working stressfully for a long time, Mario books an at-home massage every two or three times a month and he makes sure that the home address is his parents’ house. He admits that he’s very relaxed there and that he’s very comfortable around his family. His sister, Marina and his mother often come to his Master Classes to help as well.

A widely spread misconception about makeup artists and fashion designers is that they always have to be gay and most of them are actually gay.

And Mario is also not exempt from that fact with many questioning his sexual preferences quite often. Pouring more fuel to the fire, Mario doesn’t have a partner, which made people’s speculations more vivid.

But unfortunately for the gay men fawning over Mario, he doesn’t swing the other way, and while he might be getting the tag of him being gay almost all the time, he is not a bit gay.

Mario hasn’t dropped a single hint of salt to the talks of his possible or non-existent partner. He seems quite content with his life without a partner and is more than happy to be just joking around with his best friend Kim Kardashian.