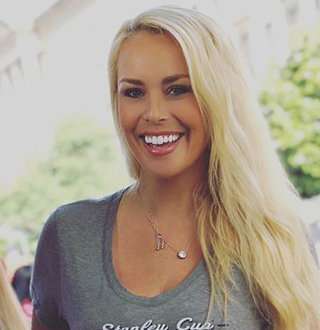 American journalist Britt McHenry kept her personal life under the wraps, however, back in 2015 she spilled the beans on the type of person she wants to marry in her life. Now, it seems as if she has found the person.

The New Jersey native is famously known as a reporter for ESPN's favorite show such as Sportscenter,  Baseball Tonight, Outside the Lines and NFL Live. She hosts the Fox News show Like It Or Not.

Like It Or Not: Britt McHenry hosts the show Like It Or Not with Bram Weinstein, and Guy Lambert (published on 5 March )

As a student, Britt used to play soccer, and during her high school, she was teammates with the future US national team goalkeeper Ashlyn Harris.

On 28 May 1986, Britt McHenry was born in Mount Holly Township, New Jersey as a daughter of Air Force Lt. Colonel. But the family moved from there soon, and Britt grew up in Satellite Beach, Florida, where she attended and graduated from Satellite High School.

You Might Want To Read: Tyra Banks Split Before Getting Married; Photographer Boyfriend Out Of Picture

After graduating from Northwestern, Britt initiated her career in ABC's Washington affiliate WJLA-TV and NewsChannel 8 by working as a sports reporter and fill-in anchor for the channel. In the mid, she joined Fox Sports San Diego as its dugout reporter for two weeks and returned to ABC 7.

In 2014, Britt again left ABC 7 and landed a job in ESPN. She started working as a correspondent for famous shows such as Sportscenter, Baseball Tonight and NFL Live. While working with the ESPN, Britt got tangled in controversy on 16 April 2015 after a video segment featuring her using foul language against tow lot employee surfaced out in the LiveLeak.

After ESPN became familiar with the video, they suspended Britt for one week. Britt apologized for her regrettable actions, and the towing company stated that they didn't want ESPN to fire Britt for her comments.

Britt continued her work in the ESPN until she got fired during the mass lay-off in 2017. She announced the news via her twitter and revealed that  NFL Draft would be her last assignment on 27 April 2017. She also insinuated in her tweet that the reason for her termination was her being a political conservative.

She tweeted she was sacked because she "was white and paid too much." She has since deleted the tweet but while it remained there on her feed, it did anger few people.

Britt then joined the Fox News and started working as a commentator and host of the show Like It Or Not.

Husband Should Be Chili Queso Fan!

Focusing on her personal life, Britt has kept her dating status and boyfriend details close to her chest. She was not romantically linked with any men that could be given her boyfriend tag in the past. But despite the low-keyness, she once talked about the quality she wants to have in her future husband.

On 2 April 2015, Britt Instagrammed a picture with a man and via the caption wrote that she would be married to the one who "shares an inordinate love of cheap Chili's queso."

Interestingly, Britt appears to have found the man of her type to be married as her social media hints her dating status. The same man from the Chili Queso post has timely become the updates of Britt's Instagram. The man, Tennys Sandgren, who happens to be the tennis player, spends quality time with Britt, and her social media has reflected it all.

On 4 June 2018, Britt uploaded a picture with her possible boyfriend and made it clear that the two were together in their trip to Paris. In the caption, she revealed that she was there to cheer him. Moreover, sho also Instagrammed a photo taken with Tennys on 17 June 2018 and disclosed that her boyfriend manages time to be with her even between his tournaments.

While she is yet to comment on her relationship status with him and admit their affair, it is pretty clear from her social media rendezvous with Tennys that the two are involved in some way, and that Britt has found the contender for a Chili Queso loving husband.