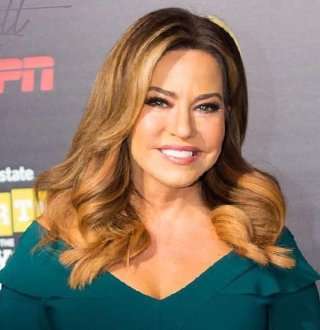 Once upon a time, in some college in Ohio, Robin Meade's future husband, saw her for the first time. The moment he laid his eyes on her, his heart quickened, his breathing stopped, and he knew as if by some heavenly revelation, she was the one for him.

Fast forward two and a half decades: Robin has been married to the same guy for almost 25 years, and they still talk about each other as if they were two love-sick teenagers.

The Ohio native is recognized as the face and the anchor of HLN's show Morning Express with Robin Meade, a job she has held since 2005.

Apart from being a journalist, Robin also likes to write and perform songs. She has released two country music albums, Brand New Day and Count On Me, the latter of which contain songs dedicated to her husband.

She went on to study at the Malone University, then later transferred to and graduated from Ashland University with a degree in programming and performance.

In a recent article for CNN, Robin revealed that her family, especially her father, had to grow up in the midst of poverty, a fact that has made her more receptive towards the plight of poor people.

Robin initiated her journaling career as a reporter for the WMFD-TV in Mansfield, Ohio. Later she landed as an anchor for WSVN-TV's Today in Florida and also worked as the channel's noon anchor and health reporter.

Afterward, she joined NBC Chicago affiliate WMAQ-TV as an anchor and even covered the 1996 Olympics.

In 2001, Robin joined HLN in Atlanta, a cable owned by CNN and started working there. She even anchored the channel's coverage of Operation Enduring Freedom and Operation Iraqi Freedom in 2003.

Since then, Robin has been regularly hosting the HLN's Morning Express with Robin Meade on weekday mornings with  Bob Van Dillen, Mike Galanos, and  Jennifer Westhoven.

In 2009, she authored a book named Morning Sunshine!: How to Radiate Confidence and Feel It Too that debuted in the section of New York's Times Best Seller list.

The job with HLN is not the only long-term thing in Robin's life, her marriage is too. Robin and her husband, Tim Yeager, are married for over 24 years. Actually, they will be celebrating their silver jubilee in few days, 6th of November to be precise.

The couple can be seen attending events together as well. They have been standing strong together in ups and downs up their marital life. Their busy work schedules haven't affected their perfect marital bond.

The stint of the morning anchor (her five-hours-plus 6 a.m program at HLN, Morning Express With Robin Meade) demands her to manage her professional and personal obligations. The situation creates less time for romance in her love life,

Retrospecting her and her husband's busy professional obligations, she stated in the Your Tango interview that her busy work schedule kept her relationship with her busy husband fresh. She said:

"Our schedules keep it fresh! We don't see each other during the week. So when we finally bump into each other on Friday nights, it's like, "Look at you! You're cute! How was your week? Great to see you! Let's go out together!"

Despite their work life-personal life imbalances, the couple managed to maintain a positive outlook towards their lack of time.

Not only that, but they also managed to work out their marriage in spite of her dynamic career - she had reporting and anchoring career in Cleveland, Columbus, Ohio, Miami and Chicago before landing at Atlanta’s CNN Center. While Robin has been married to Tim for 24 years, no news of them having children has ever surfaced out in the media. Instead, they live in Atlanta along with their cat and two dogs.

Robin's married life is one of the rare ones that appear more like fairy tales than real-life stories. It has everything that makes a tale fairy: love at first sight, the bed of roses, growing old together, and most importantly, love still fresh after a quarter of a century.