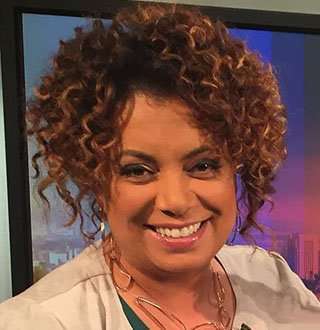 Canadian television personality Michaela Pereira posted a picture with her possible boyfriend in her Instagram and mentioned him as "my heart." And, there is a reason we speculate the guy to be her boyfriend; else why would she caption him as her heart.

The award-winning anchor earned her recognition as an anchor of KTLA Morning News in CE-affiliated KTLA channel. She currently appears as a host on HLN's two-hour daily news program, Michaela.

Knowing The Roots: HLN anchor, Michaela Pereira embarked on deeply personal journeys to learn more about her families, and herself. (Published: 7 June 2017)

She began her career as the host of a magazine show and documentary special in CHEK-TV. She also co-hosted Internet Tonight, a daily look at Internet news on ZDTV alongside Scott Herriott.

Read Also: Christiane Amanpour From CNN: A Blessed Wedding That Got Her Husband And A Son

Michaela Pereira' Bio: No Real Parents For Her!

Michaela was born on 26 August 1970 in Saskatoon, Saskatchewan, Canada. It might be a big surprise that she was adopted as a baby by Ainslie and Douglas Thomson. She was raised along with four sisters who also were adopted. Home Is Where The Family Is: Michaela poses for the family picture along with parents and adopted sisters on Vancouver Island. (Photo: Edition.cnn.com)

Michaela demonstrates her equivalent love towards her parents. In April 2017 she uploaded a picture of her parents stating one of the favorite things about them that they were still boyfriend and girlfriend even after 50 years of getting married.

Michaela joined TechTV in 1998, where she became a regular host for a live show, TechLive for three years until 2004. After TechTV's merge with G4, she moved to CW-affiliated KTLA channel.

She became a co-host of KTLA Morning News, which was a number one rated morning newscast, for nine years. The show won nine Emmy awards, and she won three Radio & TV News Association Golden Mike Awards for the show in the year 2006.

In 2013, she left KTLA channel and joined CNN to become a part of CNN morning show, New Day. After working for three years, she moved to CNN-owned HLN channel in 2016. She currently hosts her self-titled program, Michaela in HLN channel.

Moreover, she is a gay supporter who covers wide ranges of issues related to the gay community in her show. She covered the news of a gay father, who was falsely accused by United flight attendants of fondling his 5-year-old son on 29 May 2017. She even took an interview with the gay father and manifested the support for him on her show.

The time has come for Michaela to bid her goodbye to HLN. She has to leave the network after two years provided, it has undergone some major changes. The news came out during October 2018.

HLN has decided to end its production of live news that is based in  New York and Los Angeles to head for focused domestic news stories diverting from 24/7 talk on politics. So, Michaels' Across America shall no longer run in the network and for the very reason, she has to leave the network.

It is evident that she had a good time being a part of the media as she looked back to her day with her teammates at the network in an Instagram post. However, Michaela is not the only one who is putting an end in HLN journey. Her co-host Carol Costello and Crime & Justice' Ashleigh Banfield are to leave as well.

Michaela seems to be covert in case of her personal front and does not talk much about her dating status.

However, it came to light in 2016 she was dating a mysterious boyfriend for the last ten years, and her move to LA from CNN to HLN helped her be closer to him. Similarly, a year later she posted an Instagram picture with her boyfriend mentioning him as "my heart" and asked for a promise to hang in LA.

Similar To The Story: Maurice DuBois On Overcoming Obstacles With Wife! Married The Right Person

In addition, she said that she loves having a national convention aka old home week/family reunion. Similarly, on the occasion of Valentine's day 2018, she posted a picture of two hands holding each other on her Instagram. She captioned the picture with a love emoji stating that she was hanging on extra tight today to this hand.

With the couple seemingly hot in heels over each other, they look ready to take the next step and walk down the aisle before being pronounced Husband and Wife.