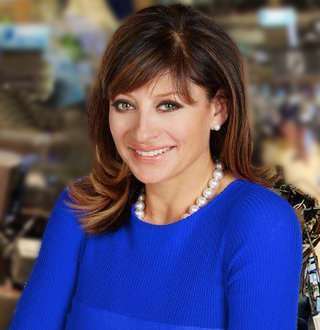 Despite not enjoying a significant perk of marital life, Maria Bartiromo's growing net worth, and love of the husband led her to have no regrets over the decision.

The Brooklyn born presenter is the face of FOX network hosting the headline shows for the network, Maria Bartiromo's Wall Street and Mornings with Maria. Apart from that, she is also the global market editor for the Fox Business Network. She rose to fame after her stint with another American network CNBC.

Maria's career took off soon after the completion of journalism and economics course from the NY University.

She began her media career with the CNN as producer and assignment editor for CNN Business News. After a five year stint with the CNN, she moved to CNBC network in 1993.

During her two-decade-long stay with the CNBC, she not only hosted various finance related shows, but she also became the first women to report live from the NY stock exchange floor.

After serving CNBC for 20 years, she announced in November 2013 that she was leaving the network. The author of the best seller 'Use the News: How to Separate the Noise from the Investment Nuggets and Make Money in Any Economy' joined FOX network after CNBC and had stayed with the news portal till date.

Apart from being a presenter with FOX, she also is a monthly column writer for USA Today. Moreover, she is the author of two other books on economics and investment apart from her 2001 best seller.

Born on 11 September 1967, to parents of Italian-American origin in Brooklyn, she has stayed near to her roots as she currently resides within 15 miles of her birthplace.

Maria Courts Controversy For Her Botched Interview With Donald Trump

Maria Bartiromo was in the news in early July 2018 for her interview with POTUS Donald Trump. Interviewing the POTUS for Fox News she was criticised for letting Trump free to air his baseless claims.

Noted commentator Brian Stelter of CNN said Maria gave him a free pass to spread his nonsense. He further added that everytime Trump said something unsubstantiated, she did not ask him for justification but just let it roll.

Internet geeks were similarly unforgiving, with many commenting the script of the interview to have been previously approved by the White House so as to help spread Trump's propaganda with ease.

She is one of the most paid news anchors doing rounds in TV today. She receives a hefty salary of $6 million per year for her works with the FOX.

Her huge salary has helped her garner a whopping net worth of $22 million. With the lady showing no signs of stopping in her stride, it would not be an overstatement to say that her net worth could soon reach the thirties mark.

The news presenter, nicknamed 'Money Honey' because of her chic looks and involvement in the financial sector. The TV persona, with a height of 5 feet and 5 inches and a perfect body shape is an alluring screen presence making FOX viewers fixated on her.

Not just that, her ideal body measurements has made her one of the most desired divas on TV. However, to all her fans, she is happily married and her marriage is all plain sailings after suffering a few rough tides at the turn this decade.

The FOX news host married private investor Jonathan Steinberg on 13 June 1999 on a secret wedding ceremony. All was going well for the couple until she became embroiled in an alleged affair with Citigroup executive, Todd S. Thomson.

Their marriage suffered a minor glitch in 2013. She was called in to act as a witness in Todd's divorce which sparked rumors about the two being in an alleged affair. However, the rumors later were proved baseless, and the couple is still together and enjoying their married life.

Maria Bartiromo On Being Shadow Banned

There have been a lot of reports on the latest shadow banning on Twitter that supposedly makes an account less visible to the followers. Maria shared the same experience in August 2018 as she confessed about having her Twitter shadowbanned.

During her show, Mornings with Maria, Maria openly complained about her tweet not getting the average amount of attention.

It wasn't long before Maria retweeted the video making sure to ask the followers if they could see the tweet.

In the video, James Clapper made the comment about how former President Obama had made it possible to set off a sequence of events including counsel Robert Mueller's investigation that is even currently unfolding.

Twitter, however, has denied that they were responsible for the shadow ban issue stating that it was not something the company did.

The biz babe is scaling newer heights in her career. Blessed with a high salary job, decent net worth and a loving husband, the only aspect of the family life missing in the presenter's life is children. Husband For Life: Maria Bartiromo with her husband Jonathan Steinberg attends an event in 2013 (Photo: heavy.com)

However, the lady described in 2012 that she decided not to have children and also added that she had no regrets at the time, despite being married for more than 13 years.

What's more, the multiple-award-winning host has not had any children even six years after announcing her decision not to have children.

With a hectic schedule oh having to work 17 hours a day, and six days a week Maria believes that she cannot guarantee the proper upbringing of a child needs in her household.

However, flanked by a loving husband and a net worth to get what you wish for, Maria has not had to look back and regret her decision of not embracing motherhood.