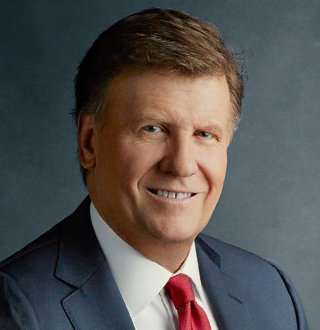 Wonder how the news anchor, Joe Kernen went from researching cancer to talking business in the Squawk Box! There should not be a string of regret though, as he boasts a salary worth in millions.

The Ohio native is popular for putting his points straight in CNBC’s Squawk Box. It is through the show he got his nickname, The Kahuna.

The CNBC veteran was born on 6 January 1956, in the Western Hills of Cincinnati, Ohio. As per his birthday, he is currently of age 62. He is hardly known by his birth name, Joseph Richard Kernen.

He graduated from St. Xavier High School in 1974 and did his bachelor’s from the University of Colorado.

He attended Massachusetts Institute of Technology, from where he earned Master’s degree in molecular biology. He worked in cancer research back then.

Based on the educational background he holds, he would have suited himself in some high end professional. Yet, his showbiz persona is lit.

Kernen landed in CNBC in 1991, merger with the Financial News Network, after experiencing ten years career as a stockbroker. He has been in the network as an anchor of business news in the show, Squawk Box.

Only the star host knows the reason behind switching interest from biology to journalism. But he sure hasn’t made a wrong choice as he relishes an annual salary of $2 million form the channel that contributes his net worth of $14 million.

Well, it seems like Joe has more to owe to CNBC than a hefty salary. He met his future wife, Penelope Scott through the channel after she joined in 1996.

The duo remained closed for two years until they couldn’t help but tie knots in 1998, turning from colleagues to life partners. They got married in a golf court, not an ordinary location for the big day, right?

And, the Squawk team is happy for its employee' progressive personal life as evidenced by the congratulations showered in 2015 on occassion of thier 15th wedding anniversary. The married life blessed the couple in 2000 with a baby girl they named Blake Kernen.

The daughter brought a new dimension in their lives, especially in the father’s as she inspired him to author a book titled Your Teacher Said What?!: Defending Our Kids from the Liberal Assault on Capitalism in 2011.

Almost 20 years into the marriage and the love seems to prevail the same charm as in the initial days of dating. It seems like Joe has nothing to regret in his life; neither switching aspirations nor bonding with the wife.