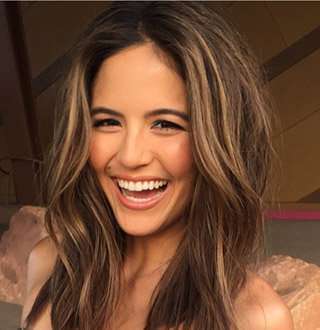 E! News correspondent Erin Lim made a headline in June 2018 after rumors involving her and her rumored husband began to gain a lot of traction. Is she really getting married?

The California native first created buzz by hosting the reality series The Rundown. However, she’s best known for her association with E! News, where she works as a reporter.

E News:- Erin and her guest, Hallie Steinfeld play Facts or Jacks on the show The Rundown (Published on 19 June 2018)

Working for E! News, she has also reported from countries such as the Philippines and Hong Kong.

Born on 14 April 1990, the E! News correspondent along with her little sister was raised in California. Because of her family’s Filipino roots, she belongs to the Filipino-American ethnicity.

Like any Filipino-American child, Erin, age 28, shares a strong bond with her parents as well as her sister, Erica Lim.

In her childhood, she used to fight with her sister over stealing each other's clothes, and her mother used to donate the clothes to Good Will. She is often seen showing them off on her social media as well.

Back in January 2014, she shared a picture of her parents on Twitter stating that she has the best parents ever and wants to shout out to her two rocks because she feels their love each and every day.

Similarly, she shared the picture with her sister Erica in June 2018 regarding their relationship as "Punk rock 4ever."

The 28-year-old California native hosts E! News’ The Rundown -- a Snapchat show initially dubbed as weekly but later promoted to three days a week show after nabbing an average audience of 13 million per episode.

In addition to working as an E! News correspondent, Erin also serves as a regular panelist on Live From E! She had first gotten her start in Hollywood as a production assistant on the 38th People’s Choice Award in 2012.

Erin has hosted 2017’s Billboard Music Awards in the T-Mobile Arena in Las Vegas in May 2017. She has anchored in various big events such as the People's Choice Awards, Miss Teen USA and Emmy Awards.

And her first time attending the Emmys red carpet wasn't much smooth, but all went fine with the help of an uber as she was all in a hurry with her makeup touchups.

Erin didn't find any better way to get to know about Dylan Minette than by taking a terrifying stroll through a scary maze. In October 2018, Erin had a great time getting scared and knowing the 13 Reasons Why star while walking through one of Knott's Scary Farm's mazes.

In the pre-interview, Dylan had revealed his greatest fear; he was terrified of getting buried alive. But, he seemed to be quite scared of masked characters who jumped out of the maze as well.

In the midst of getting scared and holding the fear in, Dylan also revealed one of his most traumatic audition. Apparently, the actor had to pretend to be getting murdered on tape for something and that really took a toll on him. Let's not forget to mention that he was at a pretty young age during the audition.

Getting back to the topic, Erin had a lot of fun trying to interview Dylan while getting jump scared by almost everything. Let's hope they do this more often; it's fun for both parties, the ones who experience it first hand and the ones who enjoy watching them scream their lungs out.

A news anchor on E! News Network makes an estimated salary of $47k per year. Given the fact that Erin is one of the more famous faces of E! News, her salary is believed to be around $60k-$70k.

Her earnings also increase from the brand endorsement of various apparels through her Instagram, which has amassed more than 163k followers.

As for her net worth, the 28-year-old E! News reporter has yet to make her finances public. Her boyfriend, on the other hand, has the estimated net worth of $4 million.

Rumors of marriage between Erin and her actor boyfriend, Lamorne Morris spread like wildfire once the former uploaded a picture of them vacationing together in France on her Instagram on 27 June 2018.

Many people had even assumed that the pair of more than a year and a half years had eloped. Marriage On Sight?:- Erin, age 28, stir the internet after posting this snap of her and Lamorne vacationing in France on 27 June 2018 (Photo:- Erin Lim's Instagram)

However, it was later revealed that the rumor of Erin and her alleged husband fleeing to Cannes, France was nothing but a hoax.

Erin and Lamorne began dating in July of 2016. However, it wasn’t until September 2017 that the pair decided to make their relationship public.

Considering the fact that they have together for more than two years, it is very likely that the duo has contemplated upgrading their relationship to husband-wife.