Is Orlando Scandrick Draya Michele's Husband, Her Life As Mother Of Two Kids? 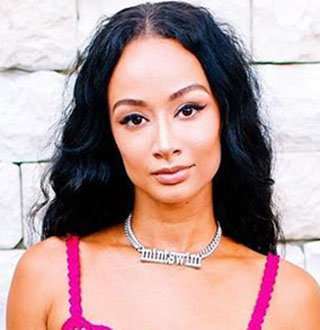 American socialite Draya Michele had enjoyed a public life since making it big on the TV, but so has her troubled relationship with on-and-off boyfriend, Orlando Scandrick.

The 33-year-old model-actress-fashion designer was thrown into the limelight for being the 9-month-girlfriend of R&B crooner Chris Brown after he and his then-girlfriend Rhianna broke up in 2009.

VH1 in 2011 cast her as one of its stars for the reality show Basketball Wives LA. She got into the basketball-flings show despite not being a basketball wife, thanks to the show's star Gloria Govan, whom she had met in an acting class. Her opinionated stance and razor-sharp tongue made her one of the most recognizable faces on the show.

Making her return to TV, the 31-year-old socialite played herself in BET parody show Real Husbands of Hollywood in 2013, two years after making her TV debut.

After making her small screen debut on VH1 series Basketball Wives as the freshman cast, she landed her first scripted acting role in Will To Love in 2015.

A year later, in 2016, she played a supporting role in the movie The Perfect Match. The Pennsylvania native was later cast to play a minor role in a 2018 Christopher Stokes directed movie titled ‘Til Death Do Us Apart.

In July 2018, BET aired her television film titled We Belong Together. While on a promo run, the former Basketball Wives LA star had got in a social media scuffle with reality star Erica Mena, after the latter implied that the former was a bad actress.

Love & Obsession: Draya plays obsessed student in BET Original Movie We Belong Together which was aired on 28 July 2018.

Draya is also set to star as Gina in the movie All In, which is slated to drop later this year. Born on 23 January 1985, Darya birth name is Andraya Michele Howard. As of 2 August 2018, 6.6 million people follow her on Instagram.

Is Draya Michele Millionaire? What's Her Net Worth?

The former video vixen has appeared in music videos for artists like Kanye, The Game, Usher, and Jay-Z. As for her modeling career, Draya has made the back pages of magazines like King, Lowrider Girl, Urban Ink and Black Men.

Sizzle For Camera: Draya Michele Talks Rise To Fame & Her Modelling Career In 2013 (Published on Mar 27, 2013)
Besides her TV, modeling and movie stints, she has made most of her fame by cashing in on a various business venture. She launched her first fashion line Mint Swim in 2011. The follow up to her first clothing line was released in 2013 and was called Fine Ass Girl. She completed her trilogy of clothing line with the launch of Beige & Coco in November 2016.

Thanks to her business acumen, the Pennsylvania native has amassed $1.5 million in net worth.

What Was Draya Michele's Career Before Basketball Wives?

Michele was not only modeling for men magazines and videos but also working as an on-again-off-again stripper before she joined Basketball Wives LA. Talking to Wendy Williams Show In 2013, she said that she stripped for a few years when she 'needed something.'

She did provide some lesser known insights about Chris Brown's then relationship with Rhianna, stating that he was 'touched by the situation,' and she got him in a 'weak and vulnerable' point.

Reveal All: Draya Michele reveals about her dating life plus her past with Chris Brown on Wendy Williams Show in 2013 (Published on Nov 1, 2011)

Not only she did clear some rumors about Chris Brown on the show, but she also cleared some rumors on her dating life, stating she didn't date 3 basketball stars in a single night nor she did date anyone without proper intervals. That's called standing proud!

Although Draya didn't know she would make big in the industry, she always tried to create her own path with her confidence and tenacity. Landing a stint at Basketball Wives though made her famous and brought her dating life to the limelight, she didn't need a reality tv to date and impressed big fish such as Chris Brown.

After Chris & Dating Wives LA, her dating count took an upstream turn and she predominantly dated numerous athletes & basketball stars such as DeShawn Stevenson before starting dating Orlando Scandrick. She was also once rumored to have dated Pittsburg rapper, Wiz Khalifa.

The former Basketball Wives LA star is the mother of two kids: Jru and Kniko. Kniko, the oldest (a teenager) of her two kids, has a minimal relationship with his biological father. Kniko Sr., as revealed by Darya’s 2016 Instagram post - he was jailed for a decade while she was 7 months pregnant.

Jru, the youngest of her kids, is fathered by her longtime on-again-off-again partner, Orlando Scandrick.

Apparently, her husband-to-be had presented her with a cushion-cut diamond weighing 6 carats.

Following their engagement, in January 2017, she confirmed that she was carrying his baby. In a dramatic turn of events, the We Belong Together star announced she and Orlando were no longer an item, days after revealing her pregnancy.

A year post the birth of their first son/child, Jru, the troubled couple were pictured together celebrating the little fella's first birthday, leading people to believe that they may have worked their differences and decided to give it another shot. In recent days, the reality star turned social media phenom is often pictured wearing the engagement ring gifted by Orlando. Does this mean, a wedding between the two is still a possibility?