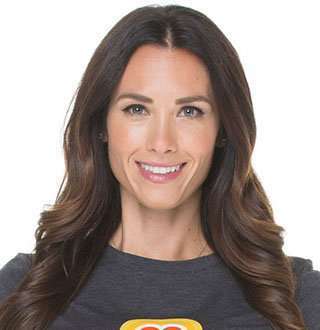 Even after having faced a traumatic divorce and being a single mother with a hectic routine, Autumn Calabrese managed to handle it all. The hectics of her work and also having to raise her son alone did not stop her from getting to her goals.

American fitness expert Autumn Calabrese is a multitalented personality. A national level bikini competitor, fitness trainer and a busy mom, she has multiple labels on her bio. Her YouTube channel has over 210,000 subscribers, and her most popular video has over 300,000 views.

Here are some of her exciting wiki facts about the star fitness expert including age, family, husband and more.

Mostly known for inventing the 21 Day Fix diet, Autumn Calabrese, aged 37 is a certified personal trainer. Nearly a decade ago, Autumn started her journey in fitness. Sick of being tired all the time, she began focusing on her health and educating herself about holistic healing.

She learned to overcome various health issues including allergies, anxiety, MTHFR and many more. Since then, she has been keeping herself fit by multiple workout routines.

She also has worked as a health expert for FOX 17. Along with that, she has also worked for major brands including Applegate, and Seventh Generation.

In addition these, the 37-year-old fitness guru has also won multiple bikini competitions. She published her healthy cookbook titled FIXATE and had certificates from the National Academy of Sports Medicine as well as the American Fitness Professionals and Associates.

Her extreme workout routines have also been featured in magazines like LA Parent, Daily Candy, C Magazine and TV shows like Home & Family.

Autumn is also known for creating the 80 Day Obsession, an 80-day workout regimen that for obtaining a beach body, which has numerous success stories and is one of the most subscribed fitness programs in the States.

The first of August of the year 2018 marked the one year anniversary of the filming of 80 Day Obsession. In an Instagram post, she applauded the participants of the programme for trying to be the best version of themselves.

Autumn was born on 23 September 1980 in Cleveland, Ohio. Autumn’s personal life resembles a closed book and has not delved into details about her early years and info about her family remains elusive. To this day, her elder sister, Calie remains her only known kin.

According to Calie's bio on her Instagram: she's a health coach who helps women overcome fear and doubt to create their happiest self. Much like her sister, Autumn she too is a fitness freak with a huge following online.

On the occasion of National Sister's Day, Autumn penned an emotional Instagram post addressed to Calie on 2 August 2018, called herself lucky to have her as a sister.

She had a keen interest in dance and began dancing at the age of 14. According to wiki sites, she even attended a small liberal arts school to study dance. But her dance career ended after she suffered from a back injury in her teenage years.

After the end of her dance career, she took up education and graduated from the Institute for Integrative Nutrition and later studied the art of vegan and vegetarian cooking.

Another Secretive Persona: Jennifer Ashton Divorced With Husband! Children, Net worth, Education And Much More

4. She Was Married Once, Now Divorced With Husband

Autumn Calabrese was once a married woman. However, her married life did not have a happy conclusion as her career and ended in divorce.

Although she has not yet revealed any information about her previous marriage or former husband, she shares a son, Dominic with her last husband.

Autumn in her self-titled website wrote that her ex-husband and she lived barely a mile apart despite the divorce and he made sure he met Dominic on a daily basis. However, when her baby father decided to move to San Diego because of his work, she had all the pressures on her shoulders.

She further wrote on her webpage, that the schedules as a fitness trainer and a single mother were tiring and she struggled juggling both. Not just that she even opened up that she had to hire a nanny to take care of her son. Son meets Favorite Idol for the First Time: Autumn Calabrese mentions her son Dominic after his meet with his favorite idol Ryan Scheckler on 8 May 2016. (Photo: Instagram)

She, however, managed to conquer her obstacles and is today reveling in the role of a star fitness trainer and a proud mother. She makes frequent mentions about her son Dominic on her social media sites and shares every little-big story related to her son.

You May Like: Bryant Gumbel On Weight Loss: Was It Cancer or Just Sickness? Health Update

With such a successful career as a fitness trainer, it is safe to say that Autumn has a hefty earning. Moreover, her diet routine 21 Day Fix Diet and 80 Day Obessions’s tremendous success has also helped her boost her earning.

Apart from that, Collaborating with various magazines and television shows, she has worked with many A-Lister celebrities and major brands which have helped further boost her net worth.

As of current, precise information about her net worth has not been published in the media. But there is no doubt that, when the light is finally shed on her net worth, it could be counted in millions.