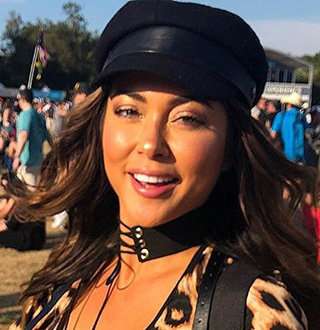 American ring girl Arianny Celeste's name seems to be a constant on Page 3 of the gossip mags, not just because of her fabulous body she flaunts at the earnest but also for her romantic affairs. Despite having been linked with a number of men, all have failed to go the distance for the star, but has she finally found the One?

The Latin-American beauty is known mainly by people as one of the ring girls for the UFC. However, she’s also a staple in TV, having served as a co-host on TV show Overhaulin’ and is often featured in magazine Playboy.

All-Rounder: Arianny Celeste lays a pinstripe on a car as she’s working her way around all aspects of car business on Overhaulin’ (Published on 7 February 2014)

You May Also Like: Yovanna Ventura Age 22 Wiki: From Dating Justin Bieber To Height Details

For her education, Arianny attended Eldorado High School and attended UNLV where she majored in fitness management and nutrition

Born on 12 November 1985, Arianny Celeste is of Filipino and Mexican descent. She made her UFC debut in 2006 as the ring girl at the Hard Rock Hotel and Casino in Paradise, Nevada.

It didn’t end there as she consecutively won the title till 2011, but she lost out to Brittney Palmer in 2012 and didn’t get to take the crown back in 2013 as well. But the ring girl took back the title in 2014 making it her fifth time to have won the award.

Yeah, there’s no doubt that Arianny earned a considerable salary. In fact, UFC bantamweight champion Ronda Rousey even argued that the ring card girls were paid too much and the fighters were not paid enough. Apparently, the promotion gave the glamorous assistants a salary of £17,000, and she made her first million in 2017.

Don’t worry, her salary didn’t plummet at all after Ronda’s complaint as Arianny now carries an estimated net worth of $3 million.

She Never Had Serious Dating Affairs

Of course, people are curious about the dating affairs of the MMA promotion’s eye-candy. Well, Arianny dated American professional mixed martial artist, Josh Burkman in 2007 after Josh first saw her and felt the need to impress her.

They broke up shortly after they started dating and Arianny was quick to move on as she got herself romantically involved with another mixed martial artist boyfriend, Tiki Ghosn. Nobody knew when the two broke up as Arianny showcased another fling with martial artist Roger Huerta in 2008.

Boy, does she have some pretty fickle list of boyfriends? Well, the one affair that stood out of hers was when she was dating her cardiologist boyfriend, Praveen Chandra in 2012. So what happened was a quarrel among the couple, that ultimately led to a physical altercation.

Apparently, Arianny kicked her boyfriend in the nose when the argument started, and Praveen choked her during the feud. They both got arrested for domestic violence on 26 May 2012 and Arianny was released after posting the $3000 bond.

Now, that’s what you call a drama. Literally.

While Arianny is pretty secretive about her flings nowadays, she has been linked with two known people, and that couldn’t just be ignored. In July 2017, Arianny was seen cozying up to American professional basketball player, Chandler Parsons and that, not surprisingly brought out rumors that they were dating.

In fact, they had a fancy dinner together. Why wouldn’t they be dating? Unfortunately, Chandler was quick to address the rumors as the two were ‘just hanging’ out.’ And that ended right there. Nothing came up after that; not a single speculation.

It was just a couple of months later when Arianny was seen with her new rapper boyfriend, Michael Stevenson aka Tyga. Are You Two Dating?: Arianny and her new boyfriend Tyga are seen at Universal Studios in Los Angeles, California (Photo: Metro.co.uk | 26 September 2017)

While it never came out clearly if the two were dating, the rapper had his arms wrapped around Arianny’s waist as they wandered around Halloween Horror nights theme park at Universal Studios in Los Angeles.

TMZ even reported that they were dating and were not yet exclusive. Since then, however, Tyga has been linked with plenty of more women, so it is safe to say that the curvaceous beauty is single now, and probably on the wait for that Mr. Right!