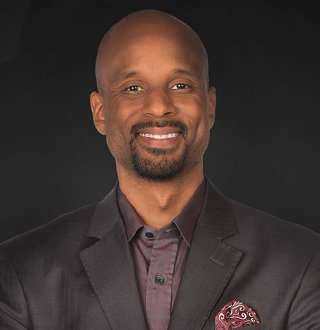 American sports journalist Bomani Jones has been associated with the ESPN network for more than a decade. With that, he has undoubtedly amassed an impressive salary and net worth from his long stint with the network.

The ESPN's talent was born as Bomani Babatunde Jones on 26 August 1980 to parents Mack Jones and Barbara Ann Posey. He grew along with brother, Patrice Jones, and sister Tayari Jones. Tayari is an award-winning author known for her novels, Leaving Atlanta, The Untelling, and Silver Sparrow.

Regardless of his extensive career, Bomani, aged 37, is tight-lipped when it comes to his personal life. He has not flaunted his girlfriend or marital status on his social sites nor in his media interviews.

However, back in 2015, he tweeted about the adverse effect of having a beautiful girlfriend.

He explained that beautiful girlfriends have high chances of being romantically linked with a famous person in the past.

With that, he ended up saying, men with beautiful girlfriends would not want to find out such secrets of their girlfriend.

A man with such beliefs would possibly be single looking out for an ordinary girlfriend.

Interesting: Cancer Survivor Daymond John's Wife-To-Be; When Are They Getting Married?

Because of his unmarried status at the age of 37, he is often professed as gay by his followers. Similarly, his brassbound personal life also supplements the gay rumors.

However, Bomani, who stands at the height of  6 feet 1inches (1.85m), has neither addressed such rumors or came out as a gay. But, his search for his girlfriend on Twitter demonstrates his interest in the opposite sex.

With that, it is not accurate to regard him as a gay man.

Bomani has been associated with ESPN, contributing as a writer and commentator for more than ten years. He was a regular writer on Page 2 at ESPN.com.

In 2012, he began to appear as a contributor on ESPN's Outside the Lines, and as a panelist on sports roundtable discussion show, Around the Horn.

In the same year, he became a guest host on The Dan Le Batard Show with Stugotz, the ESPN's radio show which was later renamed Highly Questionable in 2015. After working on the show until 2017, he left the show to move on the new show, High Noon.

Bomani hosts The Right Time with Bomani Jones, the daily program which airs on ESPN Radio, and the podcast The Evening Jones on the same network.

Apart from ESPN, he serves as the CEO of sports and entertainment media company, Old Soul Productions and a contributor for the sports blogging site, SBNation.com.

Bomani, who has been associated in the journalism field for more than a decade, has undoubtedly amassed the significant amount of net worth.

As a journalist on ESPN, he derives an impressive salary that ranges from $52k to $61k and as an experienced one, the salary might be extended.

Similarly, he earns the average salary of $53K as a radio personality on ESPN radio.

You May Like: Wolf Blitzer's Salary And Net Worth Is Massive! Among Richest Journalists?

Serving as a CEO of Old Soul Productions, he collects handsome paychecks, and he also makes money as a contributor on SBNation.com.

With many professional obligations, his net worth might be in millions which are likely to be increased day by day. However, his actual net worth till date remains confined.

These Facts About Bomani Jones Will Amaze You!

1. Bomani Jones graduated in Master's degree in Economics from the University of North Carolina at the Chapel Hill bu5 ended up choosing a career in sportscasting

2. His Father, Mack Jones is a political scientist and his mother, Barbara Ann Posey is an economist.

4. Prior to working as a sportscaster, Bomani worked as a music and pop culture critic.

5. He has served as an adjunct professor at Duke University and Elon University.