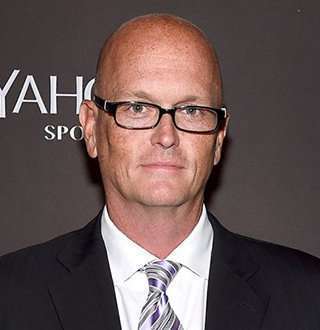 In the world of sports, fat contracts to the players is not a new deal. However, Scott Van Pelt is in a league of his own regarding his massive net worth.

Scott is the regular host of ESPN's show SportsCenter midnight edition. The bald presenter previously worked at the 11 pm edition of the show and also hosted SVP & Russillo talk show in the ESPN radio with Ryen Russillo.

SportsCenter: Scott Van Pelt addresses the Bad Beats from Week 11 in College Football on the episode of SportsCenter in 2018 (Published on 12 November 2018)

You May Like: DrLupo Bio Reveals Essential Facts - Age, Wife, Net Worth

He Grew Up In Single Parenthood With His Mom

The Brookeville native was born on 4 August 1966 to parents Sam and Cathy Mathis.

He lost his father at a young age due to alcoholism and has been an active advocate against alcohol addiction. His mother raised him alongside with his three brothers named Mark, Mike, and Matt. One of his brothers works in the marine corp.

In 2015, Scott supported baseball player CC Sabathia's decision to enter rehabilitation for alcohol abuse and lamented his frustration at his father not getting to know about his wife and children.

As for his educations, Pelt attended Flower Valley Elementary School in Rockville, Maryland and later, transitioned to Sherwood HighSchool in Sandy Spring, Maryland.

After completing school, Pelt joined the University of Maryland and graduated with a degree in radio/television in 1988.

His Career In Succession!

The University of Maryland alum's first foray after his graduation in radio/television and film was with the WTTG-TV as a sportscaster in 1990. He moved into new pastures in 1995 after joining the Golf Channel and starred in numerous flagship programs of the channel before switching to ESPN in 2001.

Aside from serving as a SportsCenter presenter with the ESPN he also co-hosted radio shows at the network.

The presenter is also the face of ESPN's golf coverage headlining the network's coverage of most prominent events of Golf including the masters. Scott has earned adulations of the fans because of his unique style of presenting and various accents he can fake, making the reporting fun.

His time in ESPN has not remained incident free, as he was rumored to have cancer in the mid-2000s.

Interesting: Amanda Burden Biography: From Romance With Charlie Rose Amid Turmoil To Age & Net Worth

His lean frame and bald head supported the claims of cancer and sharing the same name Scott did not help either. The rumors got the flame after another ESPN anchor Stuart Scott was diagnosed with cancer in 2007, who eventually lose his battle with the disease in 2013.

One Of The Richest, Massive Net Worth

Scott's association with the ESPN and his captivating voice has made him one of the most known faces on TV. Whatmore, the presenter of The Scott Van Pelt Show, has also amassed a vast net worth because of his exertions with ESPN making him one of the richest along with famous.

The presenter has been able to command a huge salary of $4 million a year because his show is one of the most followed shows in the network and is particularly a huge hit among the audience of 18-24-year-olds.

Apart from that, his importance in the channel's Golf coverage cannot be overstated. All this has resulted in the sportscaster earning a net worth of $16 million.

Similarly, he was reported to have signed a multi-year deal with ESPN in 2017, with massive increments in his salary and benefits.

The sports presenter was married to Stephanie Van Pelt in 2011.

Besides his satisfying career, the Brookeville native is also a responsible father and a faithful husband.

Scott currently resides in Farmington, Connecticut with his family of four; wife and two children.