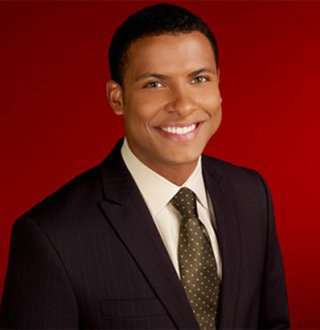 Errol Barnett, the host of the CBS Evening News, is one of the viewer's favorites, as he has always been exceptionally good at his work as a news anchor and television reporter. For somebody who is too good professionally, it is characteristic of him to draw his followers' attention towards his off-screen life.

But, Errol isn't someone who would disclose his private life to the public including his love affairs which led to gossips about his sexuality. However, Errol didn't surrender to those rumors merely and took a moment as an opportunity to shut down his haters forever.

We have compiled a fascinating set of wikis including his bio, salary with CBS and gay rumors which have engulfed the hunky news presenter since he hit stardom.

1. Errol Barnett's Bio: From Student Reporter To CBS Via CNN

The British born media personality was hired by Channel One News for their annual 'Student Produced Week' in Los Angeles which in turn served as the start of his career.

According to the wiki, he worked with the channel for five years covering the 2004 Democratic National Convention, the 9/11 terrorist attacks, the teenage heroin abuse in the suburbs of New England and several other issues.

Similar: CBS’ Juliana Goldman Married With Husband! Plus Family, Baby To Salary and Net worth

Before joining CNN, he also worked as a host-correspondent for Reelz Channel while completing his degree at UCLA. There he interviewed several movie stars like Angelina Jolie, Russell Crowe, Hally Berry and Christian Bale. He further covered different film festivals and movie premieres.

Errol was later hired by CNN International as an anchor, correspondent in 2008.  During his eight-year-long career in CNN, he covered numerous news stories including the attack in Paris, the protests in Ferguson, Missouri, and the death of Nelson Mandela.

He also hosted CNN's weekly show Inside African, for which he covered from 22 countries on the continent within 24 months.

He also reported about the rise in influence of social media sites like Facebook, Twitter, etc. In the year 2010, he anchored a live noon eastern news hour from Abu Dhabi for CNN International. After serving at CNN for more than eight years, Errol Barnett joined CBS News as a DC-based correspondent in 2016 and had been working for the channel since then.

Initially, at CBS he covered various reports like Barack Obama's final overseas as President to Peru, the 2016 U.S. Presidential Election, Donald Trump's first visit to Congress as President, and also traveled along the US' southeast coastline during Hurricane Matthew.

Errol Barnett was born on 3 April 1983 in Milton Keynes, the United Kingdom to parents Michael and Pamela Christie. He also has an older brother named Danny Christie. His mother later remarried with Gari Barnett.

When it comes to his educational background, he received his primary education from Garden Lakes Elementary School and later attended the Westview High School in Avondale, Arizona.

He commands a huge salary with CBS after joining as a marquee name in the media world, having served for a long time with dignity at the CNN.

Although there is no doubt that the network pays him well, the exact salary has not been revealed to the media yet probably, due to a non-disclosure agreement with CBS.

Most of his earnings come from his anchoring career and while he also derives a handsome salary from his commitments out of CBS. He regularly acts as a  moderator at panel discussions and speaks on the topics of innovation in journalism out of the sets of CBS.

It was a regular Monday morning back in July 2013, but the day took an unusual turn after Errol tweeted CNN Breaking News' tweet about Pope Francis' support of gay priests.

The Pope had said that if a gay person was searching for the Lord, the Pope was in no position to judge them. The tweet implied that no human being could judge another fellow being based on their sexual preferences as long as the Lord lived within them.

Errol agreed with the Pope; and shared the tweet saying 'Wow.' However, his followers misunderstood his support for gay people as his own sexual identity.

Rumors began arising about Errol being gay himself and the fact that he had no girlfriend at that time only added fire to the theories. But Errol decided to remain silent on this matter and made no statement regarding the subject.

Errol Barnett went on a running, biking, and walking competition of National Association of Black Journalists sponsored by the Fiat Chrysler Automobiles US LLC where he ran to the second position.

He posted two pictures of the event on Instagram, one where he asked for the luck of his fans, and the second where he announced the results of the competition on 4 August 2018.

The first one to finish the race was Marie Lissain and all of the CBS crew members ran to the end of the race in the blazing sun.

The NABJ aims to foster an equitable environment at its events making all the attendance feel welcomed and respected.

The organization is committed to the goal of maintaining an atmosphere where everyone who attends their events are not subject to discrimination or harassment followed on the basis of their gender, race, class or size.

Errol took the world by storm after introducing his girlfriend, Ariana Shordy in June 2015. The couple also celebrated their two years anniversary on 2 June 2017 with adorable snaps on social media. A quick look at their Instagram shows us that they very are fond of flaunting each other to the world.

You May Also Like: Married Man Lee Cowan Is Not Missing: Bio Has A Sting Of Divorce? Everything On Personal Life

After more than two years of being in a relationship, Errol decided to take it to the next level and proposed her.

In a picture shared by Errol in late 2017, he was seen kneeling in front of Ariana with a ring kept forth her, and Ariana appears stunned at the proposal. He further commented on how tough it was for him to ask the question and how her acceptance was the start of a new life for him.

Errol is happily engaged now and living a lovely life with his fiance Ariana. They have not revealed any plans for marriage. But, looking at the series of events, it seems like the couple is not going to take much longer to change their status from engaged to married.

His biography still seems to have a happy chapter still to come.