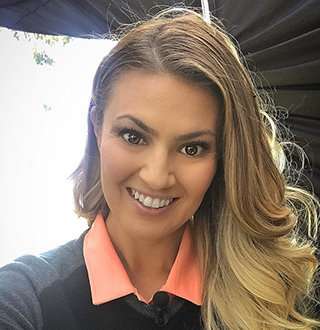 CBS’ PGA Tour reporter, Amanda Balionis went through a devastating time following her parents' accident but had a shoulder to lean on throughout the struggle.

Amanda Balionis is quite known as the reporter and anchor for CBS Sports’ golf broadcast team. She’s also known as the host of PGA Tour Today and Morning Movers.

Height Of Fashion: Amanda Balionis joins a photoshoot as an emerging presence on the golf airwaves who’s honed a subtle sense of style (Published on 16 January 2018)

Amanda had her first hit at the Genesis Open in 2017 as she joined the team for the first time.

Born on 20 June 1987, Amanda Balionis was raised in Pittsburgh, Pennsylvania but moved to Lancaster at the age of 10.

Amanda grew up around sports, mainly golf, and started playing volleyball during high school. She attended Manheim Township High School till 2004 and graduated from Hofstra University with a degree in broadcast journalism in 2008.

The 33-year-old anchor comes from a family whose members are huge fans of golf. Even her grandparents met on the golf course. Amanda played golf for a few years, and her parents loved playing with her until she joined the swim team.

After graduation, Amanda worked started her career by working for the local newspaper and eventually moving to TV sport broadcasting jobs.

She interned for CBS 2, ABC News NOW, The New York Islanders and the New York Jets. After working for the newspaper, Amanda’s TV career progressed as she started to work for Verizon Sports as a freelance sideline reporter covering Rutgers Women’s soccer and basketball.

In a few months, Amanda became a sideline reporter for the MSG Network and covered the High School Game of the Week.

Eventually, she worked as a volleyball commentator and feature reporter for MSG Varsity, covering a range of football and volleyball.

In March 2011, she was offered to become an anchor for PGA Tour that gave her the opportunity to become a presenter for Callaway Golf in 2016.

Amanda made a big jump in her career in 2017 as she became a part of one of the most prominent American sporting broadcast stations, CBS Sports Golf Team.

She enjoys a decent amount of salary of $42,000 on an annual basis and doesn't hesitate to spend wealth on extra things.

In 2016, Amanda was confronted by a devastating phone call of her parents getting hit by another vehicle and being rushed to the hospital. They were admitted to the ICU.

She revealed this news only after a year of the accident and posted a heartfelt caption of nearly losing her parents on Instagram in March 2017. Parents Are Forever: Amanda posts a picture with her mum and dad as she celebrates her birthday and father’s day together on Instagram on 22 June 2018 (Photo: Amanda Balionis’ Instagram)

Amanda is inexplicably close to her parents, and she admitted that the phone call had been the scariest one in her life. Having learned every important lesson from her mother and father, Amanda learned another lesson of life flashing back just at the thought of losing the two people she loved the most.

Thankfully, her parents didn’t face a more grave situation and recovered slowly after. Amanda doesn’t miss any event she gets to spend with her parents despite her busy schedule and often shares those moments on social media.

Is Amanda Balionis Getting Married To Boyfriend?

Amanda is exceptionally secretive when it comes to sharing any detail on her romantic affairs. She has mentioned several times on Twitter about being taken but hasn’t yet revealed the identity of her boyfriend. In a tweet, she mentioned about the “best” cookies he made so it can be deduced that she might be in a live-in relationship with her boyfriend.

However, in February 2015, Amanda posted a picture on Instagram displaying a ring on her ring finger which had brewed some rumors of her getting engaged but she made it clear that she wasn’t.

As of now, she hasn’t mentioned anything more or even talked on the topic, but it’s possible that she might be hiding her affair to surprise the fans with the announcement of her getting engaged or possibly married.