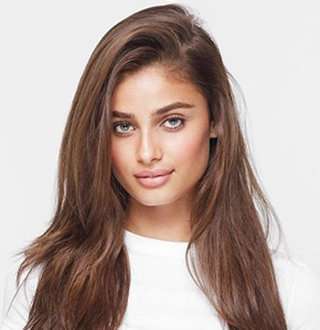 The 22-year-old has been flaunting her bold and attractive figure working for American women's wear company, Victoria's Secret since 2015. Moreover, she is also into acting and boasts several movie credits.

Miss Catwalk: Taylor walks the ramp for the opening  of the Victoria's Secret Fashion Show 2018 (Published on 9 November 2018)

Taylor was into gymnastics from an early age. And the sports did wonders, providing her with not just agility but also a slender figure which helped her excel in the fashion world.

The stunning model was born on 5 March 1996 to parents David Glenn Hill and Jenifer Rea. Taylor, possess a mixed Caucasian ethnicity, which was passed on to her from different racial parents.

Her family also consists of three other siblings; Chase, Logan, and Mackinley. Mackinley and Chase also work as a model. She graduated from Pomona High School at the age of 16.

She started her modeling career in 2013 when she got an opportunity to feature in a catalog of an Italian clothing label, Intimissimi. Taylor modeled for a Swedish multi-national clothing-retail company, H&M in 2014 which was a turning point of her career.

She was ranked number 9 in the list of the Most Followed Models by American women's fashion magazine, Harper's Bazaar. Taylor also appeared as a model in the 2016 psychological horror movie, The Neon Demon.

In 2018, Taylor was chosen for the opening of 2018's Victoria's Secret Fashion Show in New York, showcasing her exquisite physique in red lingerie and plaid mini skirt. She was further adorned by giant red rooster wings, a beautiful necklace, a lovely bracelet, and lacy black high-heels.

Acne might be a great problem for many people, but for models, it is an outright curse. In 2017, she told Allure, that she suffered from make-up induced acne, and, as a model, she had to be under the makeup very often.

Taylor has been able to keep her condition under control but the condition shows its ugly face time and again. While during her modeling sessions, Taylor's acne-face is covered in makeup and the pimples remain hidden, they appear again outside the camera. Recently, Taylor was brave enough to show her pimpled yet beautiful face to the public. That step was not only empowering for herself, but also for many other people suffering from acne.

She Boasts Net Worth In Millions

Talking about her earnings, she has accumulated the remarkable amount of income from her modeling career. She commands a six-figure salary to attend an event. Not just that, she also works as the brand ambassador for the biggest of fashion brands which have led her to earn a significant amount of money.

Her stint with renowned modeling agencies and products has made her the striking net worth of $6 million.

Taylor and her boyfriend have never shied away from the camera to flaunt their love. What's more, the duo is active on social media and treat their followers with their intimate moments time and again. Taylor and her boyfriend, Michael attends the 2018 Golden Globe Awards in January at California. (Photo: Justjared.com)

Their first picture on Instagram was uploaded in November 2013, and the love-birds have featured on each others Insta walls a countless number of times since then.

Her boyfriend, Michael shared the intimate picture with her in September 2015 disclosing about the pair's relationship. Similarly, he wished on her 21st birthday through an Instagram post in March 2017.

Not just that, Taylor and Michael are a constant staple at various red tape events as they walked the red carpet together at the 2018 Golden Globe Awards held at the Beverly Hilton Hotel on January at California.

Taylor and Michael stepped out for a Sushi date in late February 2018 in Beverly Hills, California. Michael seems to be a fortunate guy to date Victoria's Secret model, as every guy covets Taylor to be their girlfriend.

The loved-up couple made their another public appearance at a Ralph Lauren's fragrance launch on 26 July 2018. Taylor was one of the two selected models, along with Winnie Harlow to front the fashion brand's new sets of scent. Taylor looked chic in a red and white sweater and tight leather pants. She was accompanied by her actor boyfriend Michael Stephen in the show. Michael looked dapper in a black blazer matched with white pants. The photogenic couple posed together for photographs and looked gorgeous together.

The public sighting comes three months after Taylor's booze-filled Coachella. She had to be supported by her friends and her boyfriend after having a drink too many and passing out at the music festival.