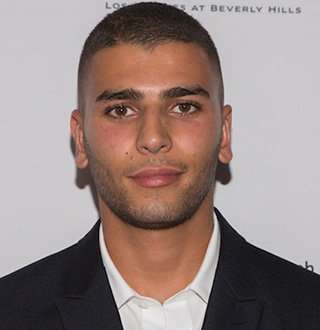 The roller-coaster of Kourtney Kardashian-Younes Bendjima relationship took another sharp turn; increasing the amusement as the couple reunited after being apart for about a month.

Younes is a boxer-turned model of American nationality, who has represented brands like Ralph Lauren and Calvin Klein, earning him considerable net worth.

The previously lesser-known Algerian-born model became famous overnight after he started dating reality show star Kourtney Kardashian in the year 2016. Here, we provide you with exciting wikis including his age, height, religion and the relationship with Kourtney Kardashian.

Born in Algeria on May 5, 1993, Younes’s parents separated when he in his early age. While his mother decided to live in Paris, he moved to New York with his father. It was in New York, where he was working on his father’s restaurant and training as a boxer, that a talent scout approached him for a contract in Next Model Management.

Although the model, aged 25, was born in Algeria, he identifies himself as American in nationality and spends his time between New York and Paris, where his mother lives.

In spite of not being a practicing Muslim, the model- who stands at the height of 6 feet and 2 inches (1.82m)- believes in religion and loves Ramadan; the idea behind it and the food itself.

Although Younes was a successful model and was involved in a high-profile relationship with Jourdan Dunn once, his name became known to virtually every American when he started dating much more aged Kourtney Kardashian, the eldest of the reality show star sisters.

The couple met in Paris, France during the Fashion Week in 2016.

II. The Fun: Height Of The Bliss

The couple- with millions of net worth between them- then vacationed around the world, from the blistering heat of Egyptian desert to the calming breeze of Italian cities. They were fated (in a good way) to have their birthdays close (Kourtney’s April 18th and Younes’s May 5th), as they cruised to the Colorado River in their private plane to celebrate.

Their huge age difference (of 14 years) didn't seem to matter much, and everything looked great until…

III. The Rift: What Really Happened?

On July 2018, after over a year of their blissful relationship, Younes commented something demeaning in one of the Kourtney’s Instagram posts.

Whether the relationship had started to sour before this incident, or it was the instigator is yet to be known, but the couple separated soon.

The next turn of events showed the couple in passive-aggressive mode, trying to prove that they were each having a great life without the other. Younes went on a vacation to Mexico and was seen flirting with other women, and Kourtney posted some spectacular photos on Instagram.

Apparently, sometime earlier in September 2018, the couple was spotted picking up dinner from Bui sushi restaurant in Malibu and then sitting together in Kourtney’s car, with Younes in the driving seat.

You May Like: Joanna Stern, Age, 23, Wiki: Married And Has Son - Not With Husband

If that is not a clear indication of their getting back together then what is?

Younes might not be a star like his girlfriend, but he is a model in demand and slowly on his way to his own stardom. From his works for the established brands like Givenchy, Hermes, Ralph Lauren, and Calvin Klein, as well as the photoshoots with Vogue Spain, Le Monde M Magazine, he has amassed a considerable net-worth of $500 thousand.

The good news for Younes is: at 25, age is still on his side, with enough time ahead to bring him more money.

Since his relationship with Kourtney Kardashian has brought him the fame he needed to make big in the modeling industry, it looks like Younes has his eyes set for big success.