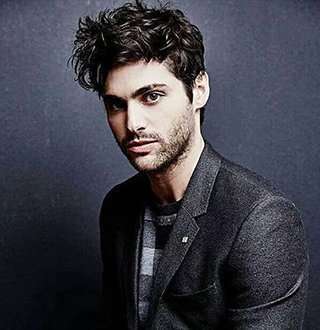 With all the hype about the gay character portrayed by Matt Daddario in TV series Shadow Hunter, it has not affected much in his relationship with the girlfriend of five years.

Talented American actor Matt Daddario rose to fame from his portrayal of the character, Alec Lightwood, in the famous TV series Shadow Hunter (2016-2018). He also presented the Teen Choice award in 2016.

The well-known American actor was born to Christiana Daddario and Richard Daddario on October 1, 1987. His older sister is an actress who goes by the name Alexandra Daddario; he also has a younger sister named, Catherine Daddario.

Since then, he has been unstoppable and uninterrupted towards the path of his success. He made his major film debut as Aaron in the romantic drama film Breath In. That very year, he had a supporting role as Channing in the Vince Vaughn led comedy film Delivery Man. In 2014, Matt portrayed Danny Ladouceur in the sports drama film When The Game Stands Tall.

The #SaveShadowhunters Campaign began after Freeform announced back in June 2018 that the series had been canceled after three seasons. Fortunately, the Shadow Hunter fandom wasn't having any of it as they initiated to save their beloved show.

Apart from getting the show renewed--which is set to air in early 2019, the #SaveShadowhunters campaign has also raised over $20,000 for the charity named The Trevor Project- an advocate who provides crisis intervention and suicide prevention for LGBTQ+ youths.

Suffice to say; their efforts weren't gone unnoticed as the cast of the show praised their loyal fandom.

"The enthusiasm is a beautiful thing, and we've been increasingly shocked every time we see something new come out that they've done."

Matt portrayed a gay character and shared an intimate and sensual scene in the series Shadow Hunter (2016-present). It undoubtedly helped him increase his gay fans worldwide on a considerable scale.

With such convincing portrayal, many speculators started to consider him as a gay. However, Matt has not commented on anything regarding the rumors. With that said, his dating profile speaks for itself!

Who is Matthew Daddario's Girlfriend in 2018?

Looking at Matt's love life; he has been in a relationship with a gorgeous and charming lady for about four years now. A glance at their Instagram accounts shows us that the girlfriend-boyfriend duo is very public about what they have between them.

Matt Daddario has been dating Esther Kim for about five years now, since 2013. The couple has a powerful bond between them that can even be known through their social media. They have been open about their relationship since the very beginning.

Esther Kim on the auspicious occasion of Valentine’s Day Instagrammed a picture of them kissing with a sweet message about the love they shared via Instagram. And things are going pretty good for this young couple besides the gay rumors floating in the air. They have not let anything affect the bond between them.

And it seems like the rumors only make love and bond between them stronger.