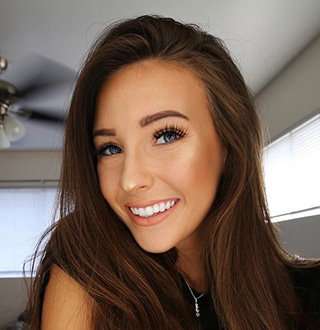 American social media icon Taylor Alesia is a part of a new generation(read millennials) that have made a name for themselves through the social media. At a young age, the American national has garnered a huge number behind her social platforms, making quite a fortune financially.

Moreover, the Instagram sensation has also found the love of her life through social media.

Taylor Alesia is best known for her massive presence in Instagram which has more than 2.2 million followers. She is also active in various other social media platforms including Twitter with 169K followers. Moreover, her self-titled YouTube channel boasts more than 2.3 million subscribers, which makes a majority of her income.

YouTuber: Taylor Alesia answers what is her real name on the video of her self-titled YouTube channel (Published On 8 August 2017)

In addition to these, she also has followers in live stream service You Now and Musical.ly (Tik Tok). Prior to her fame, she toured with famous social media personalities like Taylor Caniff and Tanner Fox, on their RV Merchandise tours.

For more in-depth details of Taylor Alesia’s life here’s a set of wikis on her with information on her early life, career, net worth, family, dating history and many more.

Scottsdale, Arizona native Taylor Alesia was born in 1996 and celebrates her birthday every year on 13 October. She grew up in a family of four with her parents and an older sister whom she is very close with.

Being a social media star and pretty active in social media, she often shares picture and tweets mentioning about her family. Her parents are very supportive of what she does, and her dad has even appeared in her Youtube videos. She regards her sister as her role model and also credits her mother for the attitude she has passed on to her.

According to the wikis, at her young age, the Youtuber faced difficulties when it came to fitting in. Due to the difficulty, she had to switch around different schools, and after graduating high school, she dropped out after just one semester.

After dropping out of college, she started using social media platforms, not just sharing her pictures on Instagram but also making creative contents on Youtube.

She posts videos about the normal instances on her Youtube channel and also about her time spent with her boyfriend along with other challenges videos which have made her a popular name. Similarly, she also shares posts about fashion and lifestyle and provides tips on how to stay trendy every season.

She has accumulated not just fans but also fascinating stories after being famous. Once she shared a picture of a fan who wears the exact clothes as her and follows her wherever she goes.

That sounds absolutely creepy but that’s the cons of being famous in social media your privacy being invaded is inevitable!

Besides cons there are tons of pros of being a social media star and Alesia definitely enjoys all of it too. Being popular on Instagram she is contacted by brands and companies for endorsement, sponsorship, and promotion and through it, she adds a handsome amount of money to her net worth.

Not just Instagram, she is pretty famous on YouTube where she garners millions of views garners a huge money through it.

Solely through her Youtube channel, she generates a yearly revenue of $11.8K - 188.4K dollars. Summing everything up the young lady has a net worth of 30,000 dollars, a figure that is constantly on the hyperbolic rise.

Making that amount of money at such a young age of 22 Taylor definitely enjoys it all!

4. Taylor Alesia Ends Relationship In Bad Terms With Two Of Her Boyfriends

The young and beautiful Taylor beside making it big in the social media for her contents is also famous for her relationship and dating history with many guys.

Alesia was first rumored to be dating the popular YouTuber Taylor Caniff when she went on the RV tour (2014) together with the star. Fans were speculating the pair to be a couple, but Caniff denied the rumors in an interview.

Later, after the interview, the furious Alesia posted a picture of them kissing on the beach and revealed that Caniff’s manager pressurized her to keep the relationship a 'secret.'

We don’t know if the relationship was real but the friendship between the pair was damaged, and he even claimed Alesia to be a fake liar and threatened to sue her for invading his privacy. Ouch, that must have hurt!

Besides Caniff, she came into limelight for dating another social media personality Mikey Barone, but it didn’t end up in functional terms as well. Barone left Alesia accusing her of not being a nice person. It must have been soul-crushing for Alesia to break up in such bad terms with two of her boyfriends!

5. Who is Taylor Alesia Dating Now?

But love bloomed once again Alesia’s life after she started dating her boyfriend, Tanner Fox in 2017. The two young lovers even shared a video of Fox confessing his love for her which left the twitter gushing about it. But the relationship was short-lived, and the couple broke up with no apparent reason being specified.

Just a year later in 2018, the gorgeous Alessia found love again, this time with her boyfriend, Matt Freeman.

She openly shares pictures with her new boo and in a tweet earlier this February she also mentioned that he gifted her a car how cool is that? We hope that this relationship blooms in good terms between Alesia and her boyfriend!