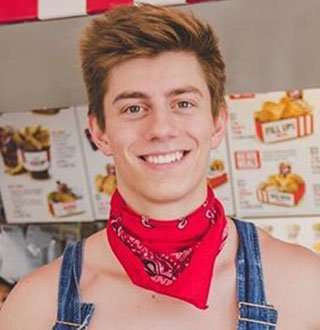 The Ohio native is widely known from his Youtube channel, Chance and Anthony, which was run by him alongside his friend, Anthony Trujillo. As of now, he runs the channel on his solo name.

The popular Youtuber was born in 1996 in Lakewood, Ohio and his birthday falls 2nd September every year. He grew up along with a brother, Jackson Sutton and three sisters.

He adores his family and cherishes special moments with them. On the occasion of Mother's day in May 2017, he uploaded an Instagram picture with his mother respecting her as "pretty lady."

Similarly, he wished his brother, Jackson through Instagram on his 20th birthday in November 2016. With smokey alluring grey eyes and ash blonde hair, he allures female viewers with the towering height of 1.83 M (6 feet).

Chance used to make short vine videos at the beginning and at the age of 16, he posted his first vine, Candy Shop on his account. His friends, Jake Paul, and Anthony Trujillo also were appeared on the vine.

His vine became popular among the viewers, and he later created the YouTube Channel, Chance, and Anthony in March 2017.

Previously, Chance was associated with Team 10, a talent incubator founded by Jake Paul. He collaborated with the members of the team for his videos such as Logan Paul, Anthony Trujillo, Ivan, and Emilio Martinez.

However, in May 2018, he quit Team 10, to focus on solo career and gaming. He now lonely run the YouTube channel in his name.

He has been streaming various games on his channel such as Fortnite and  Call Of Duty.

Chance Gets Dissed After Leaving Team 10

It was on 15 October 2018 when Chance tweeted on moving house and immediately got slammed the next day as his former team member, Jake Paul called him out indirectly in a tweet.

Jake Paul wrote, 'Errybody out here acting like they making moves... snap chatting new homes & shit but they still owe money. Don't think I forgot. I got bigger fish to fry, but it's just got me over here laughing at how broke y'all really be. #StickToTheCode.'

The response insinuated that Chance owed him money and that his tweet about moving house was just a cover to hide the fact that he was low on finance.

Chance's tweet about moving was filled with Jake Paul's fans dissing on him trying to imply that his depart from Team 10 could be showering him with hard times; both professionally and financially.

One user even went to the extent of telling Chance that he should've stayed in the Team 10 house where he didn't have to pay rent. While Chance didn't respond to Jake's tweet directly, he did post a follow-up tweet saying, 'The better path in life is sometimes hidden... Don't get dragged down the wrong one.'

Well, that could be implying that Chance is doing his best to do what's right without worrying about all the hate he is receiving.

Chance started dating 19 years old fellow Youtuber, Tessa Brooks in March 2017 as both of them were associated with Team 10. The duo often appeared in the vine videos together and called as Chessa. They even revealed the decision to "get married" in Las Vegas in June that year.

However, they announced their separation after five months of dating in August 2017 to preserve their friendship. Reacting to their breakup, the fans, however, accused Chance of cheating on his then-girlfriend Tessa as her Snapchat screenshots and videos were leaked.

The former couple is good friends now, and Tessa is currently dating another Youtuber Tristan Tales.

Both the couple does not feel bashful about sharing the glimpse of their intimacy on their social sites.

The couple celebrated the six months of their relationship in March 2018. Chane's girlfriend, Alex thanked him for being her love & best friend through her Instagram post.

Well, the young Youtube star is enjoying love life with his girlfriend so far.