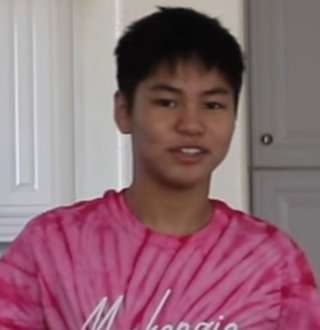 American dancer Sean Lew has a close-knit relationship with his family members. And that relationship has helped the dancer flourish, up to a point that he made JLO cry with his silky moves.

The California native rose to stardom when his dance cover on Lady Gaga’s Applause became viral on the internet. His fame amplified even more after his appearances on famous shows such as The X Factor, America’s Got Talent and World of Dance.

A regular at dance scene, he made his name from his cover dances on the songs of various music artists.

The talented dancer was born on 25 November 2001 in the states. His parents are a unique pair in the sense that they both hail from rival countries.

His ethnicity of a mixed Asian is derived from his parents, who hail from China and Japan. Yeah, one-half of his parents come from Japan while the other comes from its bitter rival China.

Despite the rivalries, the nations shared his parents have teamed up to bring their child the good way to spectacular results.

Sean, who was born on 25 November 2001, is the youngest child of Chuck and Miya. He belongs to the mixed ethnicity of Chinese and Japanese.  As for siblings, he has two older sisters, Sarah Lew, and Serris Lew.

Sean's family of five is closely knitted, and they all support and help each other in every aspect. Sean timely shares this affection for them via beautiful pictures and notes in his social media accounts.

A perfect instance of such scenario was on 14 March 2018 when Sean shared an old picture of himself and his mother on Instagram.

You May Like: Sangita Patel Bio: Everything To Know - Age, Married, Husband, Family, Height, Parents, Net Worth

He posted the picture on the occasion of his mother's birthday and left no stone unturned to make his mother feel special. He dedicated a message to his mother via the caption and showcased his gratitude for her by writing that he would never have been successful without her.

"you’re the best mom in the world and i am so thankful to have someone like you in my life. without you, i literally would have never been where i am today so thank you. there aren’t enough words to show how much you mean to me. i love you with all my heart and soul -sean."

Moreover, Sean also celebrated the graduation of his oldest sister, Sarah from Parsons School of Design on 25 May 2018. He Instagrammed a picture with his sisters and wrote that he was proud of her for completing college. Sean Lew attends the graduation program of his sister Sarah (middle) at Parsons School of Design on 25 May 2018 (Photo: Sean Lew's Instagram)

While Sean is busy spending time with his family and making dance videos, he appears to be single. He has not been linked with any girl, and his social media also lacks the presence of any figure related to his love-life.

Danced His Way To Success At Young Age, Career Heights

With talent and versatility, Sean skyrocketed into the limelight at a very young age. Sean began dancing at the age of four and eventually enrolled in dance classes at Mather Dance Studio.  In December 2008, Sean created his YouTube channel Seun Lew and started posting dance cover videos.

Sean, who stands at the height of 5 feet 5 inches (1.6 meters), became an overnight star after his dance video in Lady Gaga’s Applause surfaced out on the internet.

Afterward, he initiated his career in the entertainment world at the age of eight by landing a job on the popular TV show ‘Glee.’

He also appeared as a dancer at the X- Factor and Kids Choice Awards and became a part of the famous dancing crew, LilBeasts. The 16-year-old also went for a tour of the United States of America with ‘The Pulse On’ tour.

Interestingly, Sean is not just a talented dancer but also a skilled chef. He once competed in Rachel vs. Guy: Kids Cook-Off. In 2017, Sean won the Food Network's cooking competition show, Chopped Junior.

With such great achievements, Sean has amassed huge attention and has turned himself into a celebrity at a very young age. Despite all the fame and stardom, Sean has maintained to have a down-to-earth personality.

After making a way for himself into the minds of people through his dances, he partnered with another dancer Kaycee Rice, aged 15, and competed in the second season of World Of Dance in 2018.

And if his talents needed to provide any further proofs, he did it through his audition routine. Dancing to the tunes of Marshmellow and Khalid featured Silence, Sean and Kayce provided a mesmerizing performance leaving all the attendees in tears, especially megastar Jennifer Lopez.

Bombastic: Sean and Kaycee's dance routine in World Of Dance Auditions (Published on May 18, 2018)

Commenting on the pair's routine, an emotional JLO struggled to hide back her tears and called it a perfect depiction of a relationship. She said of the performance:

You really touched our hearts. The idea of not being able to see in a relationship … being so close to somebody, but not really seeing them. Then taking that off and allowing them in ... it was very beautiful

After getting through the auditions, Sean and Jaycee continually impressed the judges and viewers alike with their dance routines and reached up to the divisional finale. Sadly, for the couple, they were not able to compete at the grand finale after being eliminated at the penultimate hurdle, which was eventually won by hip-hop crew The Lab.

Despite not being able to win the big prize, Sean can go home content having impressed the judges and more importantly making JLO cry!