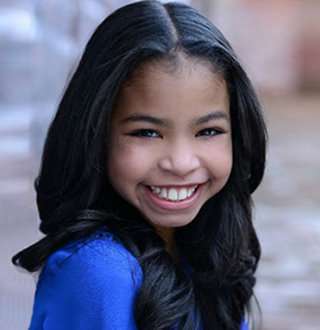 Navia Robinson had been flying in Hollywood after excelling her roles as a child actress. Despite the rise in fame, the star's feet were firmly on the ground; she was still her parents' lovely little girl enjoying her family life.

The 13-year-old starred in the Disney's family sitcom television series, Raven's Home and the Netflix series Free Reins. Apart from that, she has also showcased her acting potential through series Being Mary Jane and also acted as the face of various big brands.

Navia's on-screen best friend on Raven's home Sky Katz is also her real-life best friend, and the two share everything within reason between them.

The young emerging star was born as Navia Ziraili Robinson on 4 May 2005, at Marietta. She holds American nationality and possesses African-American ethnicity; she is very proud of her etnicity. Through her Instagram, she showed her thankfulness to Martin Luther King Jr. for bringing pride in their ethnicity.

She is the youngest child of the Robinson household and has two elder brothers. The student, of Shallowford Falls Elementary School located in her hometown, Nova is very close to her family.

Her parents; father Jeffery Robinson and mother Lisa Butler Robinson have supported their daughter's choice of career and helped her in every capacity they can. Her mother regularly posts updates about Navia's upcoming projects and links to her interviews through her social media.

Navis stands tall for her age at the height of  4 feet and 9 inches (1.44 meters). And at such a young age she took part in 2019's Women March showing her support for females.

The summer of 2011 proved to be a big one for Navia. She attended the Shine Event at Florida, a big jamboree of aspiring young age actors, and models competing to be the best of the best competitors.

Navia, at the tender age of 6, not only emerged as one of the finalists in the competition, but she also won the title of Overall Top Child Model.  The win was the beginning of a remarkable journey which led Navia to go from brand models to the face of big series.

At the age of nine, her silver screen break came through a TV series Being Mary Jane which aired on BET TV in 2014. She followed the series with a guest appearance in the hit TV series Vampire Diaries. What's more, she received a personal nomination from Nicki Minaj herself, to portray the preteen Nicki Minaj in the Queen's biopic about her.

In 2017, her principal role came as Nia Baxter-Carter in the Disney's series Raven's Home. The series established Navia as one of the most talented up and coming actors in Hollywood. The series has been renewed for the second season after receiving an overwhelming response for the first.

As an ode to the growing girls' power in today's world, Disney released a song called Legendary on the occasion of United Nations International Day of the Girl. Disney revealed the purpose behind the song during the press release.

The song encompasses the spirit of camaraderie and delivers the powerful message that when girls and young women support each other and work together, nothing is out of reach.

The song was also featured in the recent musical episode of Raven's Home, Raven's Home: Remix, which premiered on 12 October 2018.

Navia's Love For Parents Is Spilled In Her Instagram Pages

Novia has already hit lofty heights in her career in her early age.

Notwithstanding her superstardom, she has her feet on the ground and remains the loving daughter of her parents.  She continually posts about her father and mother on her Instagram whether that be casually trying the filters on Instagram with her joyed mother or wishing her a 'happy birthday.'

Marking the occasion of her mother's birthday, she uploaded an Instagram picture with her mother on 14th August 2018. She wished her mother regarding her as the woman who loves her, cares for her, and teaches her constantly and added that the love her mother is beyond words.

The teenage star is thankful for her father being with her at all times, whether that be making her laugh or lending a shoulder to lean on during sadness.

Similarly, she also acknowledges the sacrifices her mother has made to raise her the right way and is grateful for all the love she has showered on her.

While Navia has a long way to go in spite of the stardom at an early age, it seems that with the support from her family and friends the destination isn't far.