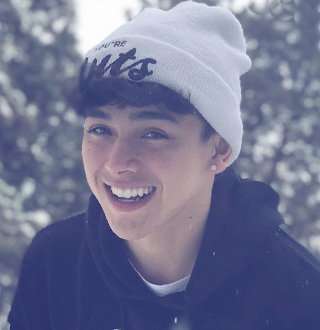 Musical.ly star Jesse Underhill frequently mentioned himself as single and also called himself as a lonely guy. But recently, he had a great prom night with a beautiful girl.

The Oregon native rose to prominence with the use of a Chinese video social network app Musical.ly where he publishes primarily lip-sync videos to his self-titled account. He has earned over 1.8 million fans to his ‘jesseunderhill’ account.

With all the entertainment content on his YouTube channel, Jesse has gained over 115K subscribers on his channel and has got almost 2 Million views.

Born in 1998, Jesse Underhill celebrates his birthday every 1 July. He was raised in Hood River, Oregon along with his three brothers, Aaron, Levi, Issac and a sister, Rachel.  Aaron and Issac are twin brothers.

Standing at the height of 5'8 (1.77 meters), Jesse also owns a self-titled YouTube channel where he shares exciting vlogs along with pranks and challenges videos.

Jesse has been active on social media since the age of 15. He first posted a picture of himself to Instagram in July of 2013. Now he has over 236k followers on his Instagram where he posts lots of personal photographs.

The 20-year-old media sensation is more popular as a Musical.ly star. He was ranked 15th on the musical.ly leaderboard with more than 1.01 million emoji-loves on a day in November 2016. He has also topped the live.ly leaderboard as well.

The sensational YouTuber has shared various videos about relationships on his YouTube channel. Back in April 2016, he posted two videos in which he explained how to know if someone likes you and how to get someone to love you.

Likewise, on 18 July 2017, Jesse uploaded an interesting video in which he introduced a 17-year-old girl named Jaqueline as his girlfriend. Even though he frequently called her 'girlfriend' in the video, in the caption, he cleared that they were not dating.

Now, being a famous Musical.ly star and gaining many fans, Jesse has already risen to internet fame. He likes to call his fans and followers Hills, as in his last name.

Jesse loves to gush about the support he gains from his fans and subscribers with anything he does. He met a lot of his fans and supporters during the 2018 Boys Of Summer Tour and even posted a cute picture with one of the Hills. Despite being famous, Jesse hasn't forgotten the primary source of his success in his Musical.ly and YouTube career.

He agrees with the fact that his fans are the sole reason that he rose to become the person he is today. Jesse treats his fans with respect and considers them his second family.

The 19-year-old star, who defined himself as alone, is a real sweetheart to so many girls. At a very young age, he has been able to garner a lot of attention in his love life.

In June 2018, he went to prom with an 18-year-old beautiful girl, Jamie Allyn. Jesse posted beautiful prom pictures of them on his Instagram. He mentioned that it was so much fun with her. But she was not the one everybody expected. In the caption, he wrote 'We Are friends' to clear that they were not dating each other and are just good friends. On the other hand, Jamie also shared the pictures of them on her Instagram on 4 June 2018  mentioning that she was little late at the prom, but it was pretty great with Jamie.

Well, it's likely that he is in search of a true love to fulfill his loneliness.