American singer and YouTuber Alex Aiono had faced failure in his personal life. But it did not matter as he had girlfriends who were forever for his life.

The Phoenix native is best-known for single pop tracks such as Doesn't Get Better and Alphabet Soup. He has garnered more than 5 million subscribers on his YouTube channel and has an enormous fan following on his social sites.

Is That Magic In His Voice?: Alex sings for his mashup Eastside and Breathin by Benny Blanco, Khalid, Halsey, and Ariana Grande on his YouTube channel (Published on 31 August 2018)

Alex is a talented vocalist and multi-instrumentalist who plays multiple instruments like piano, guitar, drum, and bass.

The young talented artist was born on 16 February 1996 in a middle-class family. He belongs to Polynesian ethnicity as his father was of Samoan and Māori descent. He is accompanied by three sisters, Sidney, Taylor, and Hallie. His family moved from Phoenix to Los Angeles when he was 14 years old.

You May Also Like: Cole LaBrant, Settled With Wife & Daughter At Age 21! Blessed Wedding To Family Details

Showing the passion for singing on early age, Alex used to perform on the streets of  Santa Monica, California. When he was 19, he released his debut single track Doesn't Get Better. In 2011, he created his self-titled YouTube channel and started uploading the cover of various famous songs. His popularity gradually began increasing, and in 2013 he went to the musical tour with the Back Street Boys, the Wanted and R5.

Alex also got the chance to appear on Awesomeness TV’s favorite show The Royal Crush, and he started developing ‘flipped’ versions of songs in 2016. Due to his successful work, he got an opportunity to sign for the Interscope Records in 2017.

In the same year, he released his single track named Work the Middle which was followed by the single ‘Question.’ Alex has collaborated with various Grammy-nominated musicians that include John Legend, Billy Mann, and Babyface.

It was on 24 August 2018 when Alex Aiono released his single, Big Mistake and he opened up about the mistake that inspired him to write the song. The song apparently, started from a terrible situation with his relationship. He didn't reveal the exact person, but he expressed his insight on how the relationship ended when they wanted different things.

It really wasn't until the breakup scenario and going through the motions of the breakup that the true colors started to be shown. It just showed me who the person was and it was completely different from the person that I thought they were.

And frankly, Alex related to the concept, that is always about love. He made it clear that he didn't want to call out anyone in the song but he just wrote about an experience he went through and that there might be someone out there who could relate to the lyrics.

While talking about the song, Alex also opened up about the most helpful advice that he got along his career from Shawn Mendes. Whenever he is nervous about performing in front of thousands, he remembers how Shawn copes with it imagining as if he was playing to the same few people that came to his very first show.

Coming back to Big Mistake, Alex also expressed that he wanted to have a full album and how it was his big goal as he fell in love with artists along with their albums.

Who is Alex Aiono's Girlfriend? Answer To Gay Rumors

When it comes to personal affairs, Alex was in a relationship with the 23 years old YouTuber, Meg DeAngelis. The couple started dating in late 2014, and their romance was often exhibited in their respective YouTube videos. Similarly, the duo appeared in cover songs together and also got featured in the vines videos. However, their relationship ended in 2015 after three months.

After his breakup, one of his Twitter followers asked whether he was gay or not. He replied that he was straight in his sexuality and that he had mad love for everyone.

Alex prefers to spend times with his family members, which is demonstrated by his post on the social media. Back in March 2016, he uploaded a picture with his sisters in his facebook with a beautiful caption that stated three reasons he did not need a girlfriend.

You Don't Want To Miss: Chris Crocker's Gay Story! Boyfriend To One Video That Made Him Famous

Moreover, he does not miss to flaunt his love or his family member. He openly showers his love on Instagram wishing his sisters and mother a happy birthday.  Likewise, Alex also enjoys celebrating various other occasions along with his family. 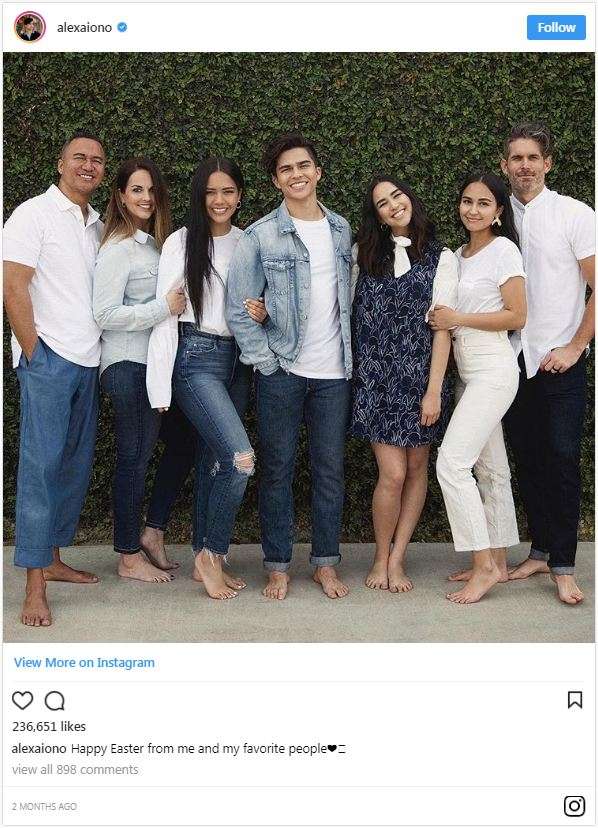 Alex, who is a family man, resides with his family and is reportedly single.  And it's likely that he does not need a girlfriend given the fact that he has a loving and caring family.