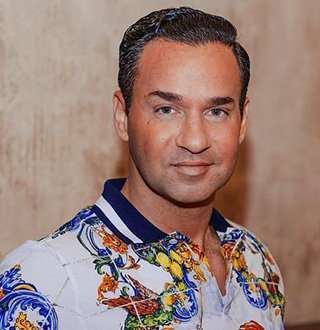 Jersey Shore star Mike Sorrentino walked down the aisle with his wife!

Mike ‘The Situation’ Sorrentino, aged 36, got married to his longtime girlfriend Lauren Pesce, aged 33, on 1 November 2018 at The Legacy Castle in Pompton Plains, New Jersey.

The reality star was pretty excited to spend the rest of his life with his gorgeous wife. Married & Happy: Mike Sorrentino and his wife pose for a picture in their wedding attires on 1 November 2018 (Photo: usmagazine.com)

Jenni and Nicole’s daughters, Meilani and Giovanna both standing at the age of 4 served as adorable flower girls in the wedding while Ronnie’s on-off girlfriend, Jen Harley also attended with her 6-month-old daughter, Ariana.

You May Also Like: Sheldon Bream Exclusive Bio: From Age, Occupation To Wife Shannon Bream

Mike and his wife were college sweethearts who had been dating for three years in the mid-2000s before parting ways at the start of Jersey Shore in 2009. They soon rejuvenated their dating life after the show’s wraps in 2012 and Mike proposed to his then-girlfriend on Valentine’s Day in 2018. No More Girlfriend Tag: Mike gets down on one knee to ask his future wife to spend eternity with him (Photo: Mike Sorrentino's Instagram | 27 April 2018)

The proposal unfolded only in June on Jersey Shore Family Vacation that follows the MTV star as he gets down on one knee, presenting a ring and a heartfelt declaration of love that had his soon-to-be wife in tears.

The pair only learned in the final days of their wedding planning that Mike had been sentenced to eight months in prison and four years of probation for tax evasion that begins no earlier than 15 January 2019. A source close to Mike expressed how he wanted to come back home soon to his wife after the sentence by saying,

He just wants to get his time done, come home and start his life over. He really wants to spend as much time as he can with her before he leaves.

Aside from the dreading news, Mike shared his enthusiasm of getting married to his wife and age with her by sharing a picture on Instagram and filling the caption with everything sweet as honey,

‘Today I marry my best friend. I’m so grateful that you are by my side. I promise to be my best-self everyday & make you proud to call yourself Mrs. Sorrentino.’

The new wife sharing a shared net worth of $300 thousand with Mike expressed a relatable sentiment as she called it, ‘Now it’s baby making time!’

Looking at the excitement Mike’s wife has to begin their life together after his sentence, it might not be long before the couple introduces a new addition to the family.

Well, as much distraction as the wedding may have been from the sentence Mike has to serve, here’s to all the good wishes for the newly married couple.