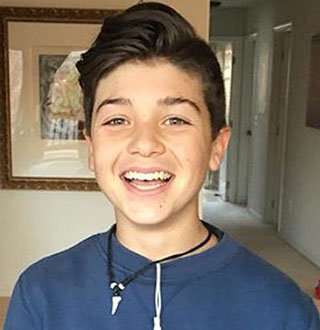 Joey Birlem had always been the crush of thousands of youngsters. But when he had a crush on someone, it did not turn out well leaving him heartbroken.

Joey Birlem age 16, is a social media star who rose to fame from the app musical.ly. Apart from that, he is also a well-known star in social media sites Instagram and YouTube boasting a huge fan following. Joey Birlem poses with one of his fans on 9 July 2018. (Photo: Joey's Instagram)

dJoey was a skateboarder during his childhood days. Before getting famous, he handled a Twitter account illest_sk8 with a modest number of followers.

He rose to fame after joining the app Musical.ly where he lip-synced to various songs. His lip syncing made him one of the most famous musers and garnered a huge fan following. At present, Joey has more than 1.8 million fans on the app. He has been compared to famous muser Jacob Sartorious due to their similarities in the style of making musically.

His musical.ly fame has helped him amass a huge following in other social sites too. He has more than 160,000 subscribers on YouTube where he posts his Musical.ly videos on a regular basis. Similarly, he is also a huge Instagram star like Victoria Waldrip and boasts more than 1.3 million followers on Instagram.

In 2017, Joey alongside the other emerging social media sensations, Charles Gitnick, Hello Kylie and Chad Nazam formed a touring social media stars group named Team Choey. The team members have toured on the various locations such as Toronto, Dallas, Phoenix, and New Orleans.

Moreover, they threw a huge birthday bash for Joey on his 16th Birthday in the May of 2018 in Orange County. They also run the Youtube channel of the group, which has amassed more than 90k subscribers.

His Birthday, Address And Phone Number?

Joey celebrates his birthday on 29 May every year having first come to the world in that very day in the year 2002. He currently resides in Los Angeles, California in a family with four siblings. Born to mother Jen Valdez his family also has two sisters, Sophia and Bella and brothers, Scotty and Kashius.

Standing at a modest height of 5 ft 6 inch(167.5cm), and blessed with looks to kill, the Musical.ly sensation has a huge female fan following. Despite having been speculated as a gay when he started syncing lips to the hit tunes, they have been washed away by his chemistry with girls.

Every movement he makes creates an uproar in social media and his phone number and address is one of the most talked about aspect of Joey's life among fans.

Joey has been professed as a gay because of his uncanny dating status. Moreover, his Instagram pictures relishing with his male partners of the group Team Choey has supplemented such rumors.

His fans and followers even question his sexuality on the various social sites. Back in June 2016, he was asked whether he was a gay on the global social network, Ask.fm.

Replying the interrogation, he stated that he is not a gay and has interest in the girls. His interest towards the opposite sex does not authenticate him as a gay.

Joey meanwhile, often returns the favor by expressing his love for his fans. From sweet tweets to adorable posts on Instagram about his fans, he never misses a reason to thank his fans. Despite numerous fans reserving a special place in their heart for the heartthrob, he has never been together with fans.

But Joey, aged 16 and famous dancer and actress Maddie Ziegler became the highlight of news after both of them started exchanging flirty mentions in social media. Jack Kelly's girlfriend, Maddie, aged 15 exchanged flirty messages from her Instagram account with Joey and hinted to their fans about a possible relationship brewing.

However, all the talks about Joey and his prospective girlfriend received cold water after Maddie issued an apology saying that her Insta had been hacked. She went on a long 15 minute Instagram Live Stream and addressed the cheating rumors with boyfriend Jack. On the video posted in November 2017 she said:

I am sorry that I look crazy. I have been doing nothing today.

But Joey was not ready to accept Maddie’s excuses and took to Twitter and called her a bad liar. He was heartbroken over Maddie’s confession and blamed her for creating such a messy situation.

Whatever may be the truth, as of present Joey has not addressed his current dating status and chooses on making a name for himself on the industry.