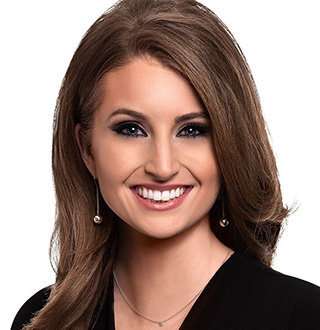 A radiant beauty and a weather enthusiast, Stephanie Mead’s presence early on the TV screen brightens everyone’s day. This gorgeous journalist with an ever-smiling face is best known as a weather and traffic anchor for WISH-TV. She anchors for the networks’ Storm Track 8.

Previously she has also worked as a meteorologist for KMVT-TV, Northern Television Centre, and NBC 26.

The Chicago Native Stephanie Mead celebrates her birthday every year on 27 March. She was born in a family of six with her parents, two sisters, and a brother. Mead Family: Stephanie celebrated Thanksgiving with her family members -- Mom, Dad on the back and sisters, and brother (Photo: Emily Mead's Instagram)

Her official professional endeavors only started after graduating from college in 2013. She started off her career in the broadcasting industry as weather reporter forecasting weekend weather for KMVT and KSVT in Twin Falls, Idaho. She served the network for a year and a half. Then in 2015 her career soon went to heights as she moved onto work as a morning weather reporter for NBC26’s WGBA in Green Bay, Wisconsin. During her two years at the WGBA network, she covered numbers of severe weather events in Wisconsin. One of her notable reporting was on the perilous thunderstorm which delayed the PGA championship (golf tournament).

If you are a regular follower of Stephanie, then you probably must be aware of the tweet she made in 2016 stating that Chad, The Bachelorette's contestant, reminded her of her worst ex-boyfriends in the past.

But soon in 2017, she found a new Chad in her life who restored her faith in love. With her new boyfriend Chad Schultz, they publicly announced their relationship after going on a wedding date together posting a picture on Instagram. Love in Disneyland: Stephanie Mead poses for a picture with her boyfriend Chad Schultz at the place of happiness (Photo: Chad Schultz's Instagram | 20 November 2018)

On November of 2018, the pairs also went to Disneyland together. Her boyfriend or so to say, her potential husband-to-be is very close with her family too.

With a bond as theirs, looks like the news of the couple getting married will be around anytime sooner!