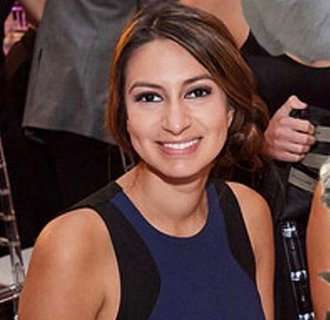 Indianapolis native was spotted with a hunk in an event hinting at her possible boyfriend. However, she elucidated her relationship status with a hashtag ‘Not My Boyfriend.’ But what triggered the need to explain?

Chelsea Ambriz is an experienced meteorologist with a demonstrated history of working in the environmental services. She is famous as an evening meteorologist at WSAZ based in Huntington, West Virginia Area.

Chelsea was born on 17 June 1992 and grew up in northwest Indianapolis. She has a sister named Emily Ambriz and also a brother. She is close to her family and often spends a pleasurable moment with them in her free time. Her family now lives in Carmel.

She graduated with a degree in atmospheric science from Purdue University in 2014. She also has a minor in communications and a certificate of global entrepreneurship and innovation.

The TV show ‘How The Earth Was Made’ sparked her interest in the earth’s atmosphere and weather from a very young age. She interned for three months at the CW affiliated station WISH-TV in Indianapolis where she did severe weather research for the Red Cross.

Her broadcasting career started in January 2015 from the ABC and CBS affiliated news station WBBJ TV based in Jackson, TN. She worked there for two years till 2017.

Presently, the broadcaster works at NBC and CW affiliated news station WSAZ-TV as a meteorologist and also serves as a community volunteer leader for American Red Cross.

In her free time, she enjoys playing tennis, painting and loves to travel. She also has a cat named Bert on West Virginia.

Explore:  Michelle Beadle Dating Boyfriend Steve Ends In 2016, Is She Married In 2018 (also her net worth)?

As of her love life, it’s quite blurred as she has not publicly announced her dating status.

Environment enthusiast Chelsea’s professional life is entirely open to the public, but her personal life is still quite vague. Chelsea hasn’t introduced her possible boyfriend to her fans to date.

But in February 2018, she attended West Virginia’s Carnival Fundraiser program at Clay Centre for the Arts and Sciences with a handsome man whom could be her possible boyfriend. However, before fans could speculate anything, she has hashtagged a picture saying ‘Not My Boyfriend.’ She made it clear that he was just a friend and a co-worker.

So, with her social posts, it’s clear that does not have a boyfriend. And as of 2018, she is reportedly not married and yet to have her children.

Chelsea being an environment lover, would surely want to have a husband who is also an enthusiast of environment and atmosphere.

So here is the revelation for the meteorologist not having a partner of her own, cause she entertains trying her chance on other's husband. This embarrassing deed blasted the headlines on September 1, 2018, after her brawl with her co- newsreader, Erica Bivens on a night out.

The issue was Chelsea flirting with Erica's husband Donald who was too loyal of a husband to be interested in her. But the rejection didn't end in peace instead it ended in some cracked skull and numb ears. Friends Or Not: Chelsea Ambriz with her colleague Erica Bivens. (Photo: Law And Crime)

Chelsea, who was accused of hitting on her co-worker's husband, had a hard time digesting the allegation. She went down on a grapple with her co-worker and fractured her skull only to get arrested and charged with misdemeanor battery.

The culprit appeared in court on 21 September 2018. She is bound to suffer one year jail if convicted of assault charges. But the details on her punishment is not revealed yet. For now, the bits known about the aftermath is her suspension from the network. There is no way she can get away with what she did.