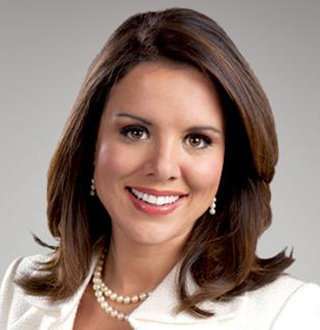 A thunderstorm junkie and a certified bookworm -- Kate Bilo is an American Meteorologist. She is best known for her current position as a chief meteorologist for CBS3.

Previously, she has served as a meteorologist for AccuWeather and Bloomberg Television Network. She also guest hosted CBS’s Daytime Emmy Award-nominated talk show THE TALK.

The Phoenixville, Philadelphia native was born in 1986 and celebrates her birthday every year on 20 June.

After graduation from Penn State University, the aspiring meteorologist started her professional career in State College for AccuWeather since 2004. During her time at AccuWeather, she delivered forecasts on TV and radio for several AccuWeather clients including FOX News, CNBC, ABC News Now and many local stations.

After serving Accuweather for six years, she joined Bloomberg Television Network in 2010 as the main morning weather anchor. Who Is Kate Bilo’s Husband?

Moving onto her love life Kate is happily married to her husband Scott Eby (a software engineer) since 31 August 2007. The couple celebrated their eleventh wedding anniversary in 2018 and not once after marriage there have been any rumors of divorce or affair between the lovers. Not only is her love life full of bliss but her family life is also blissful. She is a mother to her three beautiful kids Leo (2010), Anders (2012), and baby Solenne Marit Elisabeth (2017).

Kate Bilo Hospitalized After Giving Birth To Her Third Baby

Getting pregnant and the time around it hasn’t always been an easy one for Kate.

Months before giving birth to her second kid Anders, she was threatened through Twitter messages by a Lansdowne, Pennsylvania man who declared to kill her in front of her son Leo. However, the creepy man was tracked down and is sentenced to five years in federal prison. Another problematic situation arose after giving birth to her baby girl Solenne in 2017. She pulled a muscle from picking up her newborn baby. But when taking an Advil didn’t relieve the pain, she got hospitalized. Later the doctors found out that she suffered a pulmonary embolism (a condition where multiple arteries in the lungs get blocked by a blood clot).

Despite all the difficulties she had to face, we can gladly say that Kate is safe, alive and healthy as of now!