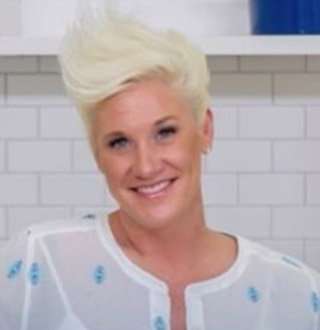 American chef, Anne Burrell made some jaws drop with her vast weight loss transformation, and she didn't hesitate while sharing the secret to her new healthy body.

Anne Burrell is widely known for hosting Food Network’s Secrets of a Restaurant Chef and co-hosting Worst Cooks in America.

In late 2011, Anne hosted an 11-day Food Network cruise through the Mediterranean and Atlantic aboard the new cruise ship, Celebrity Silhouette.

Born on 21 September 1969, Anne W. Burrell was raised in Cazenovia, New York. She graduated from Canisius College in Buffalo in 1991 with a degree in English and communication.

Anne attended the Culinary Institute of America a year after her graduation and graduated in 1996 with an Associate in Occupational Studies. She studied at the Italian Culinary Institute for Foreigners in the Piedmont region as well.

You May Also Like: Bryant Gumbel On Weight Loss: Was It Cancer or Just Sickness? Health Update

The 48-year-old chef worked in various restaurants in Italy for nine months and returned to the US as a sous chef at the restaurant, Felidia.

Chef Lidia Bastianich owned the restaurant, and the connection helped through her career.

Standing at the height of 5 feet 2 inches (1.5 meters), Anne became the chef of Savoy and Italian Wine Merchants.

Eventually, she took the position of executive chef at Centro Vinoteca in New York City in 2007. Due to her busy schedule, Anne left the restaurant in September 2008.

It was in spring 2017 that Anne opened her first restaurant, Phil & Anne’s Good Time Lounge in Brooklyn but the restaurant closed in April 2018.

It was in 2005 when Iron Chef, Mario Batali asked for Anne to serve as one of his sous chefs, alongside restaurateur, Mark Ladner. Anne served as his sous chef during his time with the show, The Iron Chef America.

Her show, Secrets Of a Restaurant Chef, made its debut in June 2008 and she eventually appeared on Food Network’s The Best Thing I Ever Ate in 2009.

Anne won the first premiere of the show which was in January 2010 as her recruit, Rachel Coleman eliminated Beau’s recruit, Jenny Cross.

The second season was a bit more extra when Chef Robert Irvine replaced Beau. Anne and Robert made a bet of Anne losing her signature hair while Robert was dying his hair platinum. Lucky for Anne, she won once again with her recruit, Joshie Berger.

Anne participated in the culinary competition, The Next Iron Chef in 2011 where she got eliminated in the sixth week becoming the fourth runner-up.

She hosted the show; Chef Wanted with Anne Burrell from June 2012 to October 2013 that aired 36 episodes in three seasons.

According to sources, Anne Burrell has got an estimated net worth of $5 Million through her hard work in the cooking industry.

She earned her fortune from her time in the show; Worst Cooks in America that she hosted till the end of the series. Her restaurant, Phil & Anne’s Good Time Lounge brought her a considerable amount of wealth.

Anne earned a lot from her shows, Secrets Of a Restaurant Chef and Chef Wanted with Anne Burrell. Anne worked more than she could to reach to the point where she’s in and become a millionaire.

The Food Network star was always the main subject of her sexuality speculations often receiving several gay comments. And in May 2012, it was confirmed that Anne was an open lesbian during a radio interview with Ted Allen.

And while the media was busy in making it seem like Ted outed Anne’s sexuality, she mentioned that she never hid the fact. Although Anne barely spoke about her personal life to anyone, she was not a bit hesitant to reveal her long-term relationship with her partner.

After her not so hidden sexuality got revealed by Ted Allen, Anne officially announced her relationship with future spouse, Koren Grieveson.

Having gone through years of togetherness with her girlfriend, Anne announced their engagement on 31 December 2012 on Twitter with much joy.

Getting Married Soon?: Anne wishes a happy new year to fans along with the announcement of her engagement to girlfriend on Twitter on 31 December 2012 (Photo: Anne Burrell’s Twitter)

After the engagement, Anne had been constantly on the road with her cooking shows for quite a while, which meant that she didn’t get to spend much time with her partner.

But since that’s all settled down, it was finally the time to scrap out the wedding details of the lesbian couple. When asked about the place where the couple will be getting married, Anne confessed to Radar Online that the location had yet to be decided, but Puerto Rico held a special place for them.

Other than that, Anne showed no mercy in hiding the plans of soon to be married life with her future wife. The two are taking it slow, and if they get married, there’s no doubt that Anne will be the first to announce it.

The Chef Wanted star blew her fans away with her weight loss transformation in 2017 which was more than noticeable. Anne slanted to keeping herself healthier as she took the challenge of burning her weight with healthy steps. Massive Weight Loss: Anne Burrell before and after her weight loss transformation in 2017 (Photo: gettyimages.com)

She shared her weight loss tips with the Life & Style, and the majority of it didn’t have any workout and just changing the way she ate.

One of the most important things Anne committed to was never skipping breakfast to start her metabolism.

The other important thing was she never kept herself hungry and always kept snacks with herself like almonds or energy bars. There’s no telling where her weight loss motivation came from, but Anne is doing better than ever with the foodie spirit still residing in her.