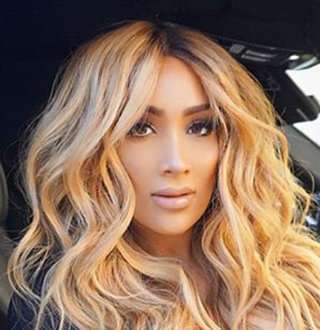 American Reality star Nikki Muddarris' life fell apart when she was bereft of a family member in 2015.

The Los Angeles-native came to prominence from American television series, Love & Hip Hop Hollywood in 2014. The VH1 reality series, not only shed light into the life of one of the most controversial socialite's life but also provided viewers with glimpses of her strip club owning family.

Nikki Muddarris had a controversial time back in 2015 with her former boyfriend, Mally Mall. She claimed that he was blackmailing her with their sex tapes. Another accusation against him was violence. The same year, a judge granted her a restraining order against him, which required Mally Mall to stay 100 yards away and have no contact with Nikki.

Nikki Muddarris was born to parents, Abu and Marcelle, on 29 June 1990 (age 28 as of August 2018) in Los Angeles, California, USA, as Nicole Bediah Muddaris.

She stands tall with the height of 5 feet 5 inches(1.65 m) and possesses a mixed ethnicity with ancestral roots tracing back to Italian, French-Moroccan, and Arabic. The Love & Hip Hop Hollywood star graduated from the University of Southern California, with a degree in business.

What is Nikki Muddarris' Net worth?

Nikki Muddarris enjoys the net worth of $800 thousand. She is best known for appearing on the hit VH1 reality show, Love and Hip Hop: Hollywood.

Apart from that, she is also very active in her family business which has also helped boost her net worth. Her family has been in the nightclub and adult entertainment industry for decades. She manages three of her family's establishments in Hollywood.

Nikki's mother, Marcelle Muddarris appeared on her daughter’s show, Love & Hip Hop: Hollywood, where she talked about the love and support she has for her daughter despite what people think of her.

Being a reality star, like everyone else, Nikki is prone to different kinds of criticisms and abuses for showing off her beautiful body to debates on her numerous surgeries.

Her mother spoke fondly of how Nikki was a brilliant student with A-plus grades in all her subjects every semester. She graduated with a 3.43 CGPA. She gave a beautiful insight about their mother-daughter relationship, revealing their close bonding of souls.

Marcelle expressed that she would support Nikki to her last breathe even if she was wrong.

She ended her appearance on the show by giving her a full backing stating that ‘If your mother doesn’t support you, I assure you nobody else will.’

Nikki was raised in L.A by her strip club owning family. The Muddarris family owns four strip clubs in LA.

Her father, Abu Marcelle, has been in the strip club business since the 70s, which is how he got the nickname, “God Father of Burlesque.”

Despite looking like a mobster, he was a well-respected businessman. Aside from that, her father was also a very responsible dad who didn’t expose her to the strip club business while she was growing up. Her father knew how to keep business and personal matters separate.

The year 2015 was a hard one for Nikki as she had a hard time with her boyfriend, Mally Mal. However, instead of the year getting better, it just got worse as her family had a devastating incident which tore her family.

On 13 June 2015, Nikki had the worst day of her life as she lost her brother Anthony Omar Mudarris (B. March 23, 1987) due to a drug overdose in Studio City, California. She was broken beyond the point where words could convey how she felt, however, she did open up about how she felt with her fans on Instagram.

"I love you with all my heart I hope now you are not suffering and you are watching me like the angel I know you are. I wish I could give my last breath to bring you back. "

Like most family and friends who lose someone to suicide or drug overdose, Nikki had a tinge of regret and was laced with the thoughts that she perhaps could have done more. She stated that she tried helping him, but he pushed her away. A year later, on his birthday on 23 March 2016, Nikki paid tribute to his late brother again, wishing him a better afterlife in heaven.