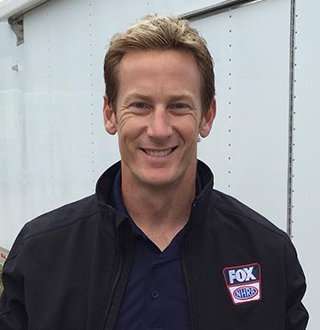 Two-time national NHRA champion Bruno Massel Junior made a fortune using his skills at the track and later used his expertise to run a bunch of TV shows. However, it didn't stop him from becoming a family man.

Woodridge native Bruno is notably acknowledged as a television host as well as a Drag Racer. He serves as a host on Velocity, as a commentator for NHRA on FOX as well as a national spokesperson for Autogeek.com.

Drive Safe Homie:- Bruno collaborating with NHRA Youtube channel provides a tutorial on how to drive a drive a Turbo Car (Published on 6 June 2018)

At present, he contributes to ESPN by traveling across the US as an Automobile expert, helping consumers to pick better cars.

Bruno Massel Jr. was born on 23 May 1974 in a racing family to father Bruno Massel Sr. and mother, Roz Massel. His father is a true veteran of drag racing who was named by a prestigious industry publication as one of the “50 most innovative individuals in drag racing.” Bruno was also attached in racing from a very young age.

Racer In Our Vault:- Justin Shearer Divorce Chances With Longtime Wife & Any New Girlfriend He Might Have

Bruno, age 44, regularly mentions them on social media and cherishes them with wishes on special days.  Back in January 2016, he spent an enjoyable vacation on his mother’s birthday with his parents and even shared the moment on his Facebook.

Behind the wheel, Bruno, who stands at the height of 6 feet 1 inches, is still very active.

Behind Bruno Massel's Impressive Net Worth

Bruno’s career started from modeling after he graduated with honors from the University of Iowa with a BBA. Bruno decided to put a job in law on hold when Chicago area modeling agent discovered and offered him for modeling.

Bruno then began tinkering with photo shoots and the family business of Drag Racing. He competed in several championships including IRHA National tour.

Bruno began to switch gears in 2001, as he decided to put his hand on camera as a TV commentator for the IHRA racing series on SPEED and TNN.

His knowledge and experience of the motorsports industry and presence in front of the lens have led to a full-time career as an on-camera host embracing various disciplines of racing and special events in the automotive enterprise.

He serves as the host of Truck U and Garage Squad on the Velocity network and is also working on ESPN’s coverage of NHRA Drag Racing as a reporter. Truck U is currently in its 14th season.

Bruno took on his latest challenge in creating his own half-hour pilot “Behind the Helmet” which is currently being viewed by networks for release. He has won total 37 drag racing games and also made an impressive amount of net worth from his drag racing as well as television career.

As of 2018, the Velocity has the estimated net worth of more than $6 million.

Bruno Massel Jr. is happily married to Dayna Purgatorio. They have been together for a quite long time as Bruno mentioned that he had spent more than half of his wife's birthdays together.

Earlier on 24 May 2018, Bruno celebrated his wife’s birthday and wished her in a very romantic way by posting a collage of old and recent pictures. He captioned the image as;

Happy Birthday Baby! I’ve officially now spent more than half of your bdays with you, looking forward to all the rest of them. Love you xoxoxo.

The pair is also blessed with two sons and Bruno frequently shares the picture of them on his social accounts, but he has not disclosed the name of their kids yet. Family First:- Bruno shares a snap of his two sons as they participate in an event held at Brainerd International Raceway on 11 August 2018 (Photo:- Bruno Massel's Instagram)

Moreover, the wedding date of the couple is still a mystery. However, it is known that the couple got married on 29 December. Bruno shared the picture of them celebrating their wedding anniversary in a very romantic dinner date in 2016.

Well, the couple is showing no sign of slowing down their romance. Instead, the love and affection between the family members are still growing with age.