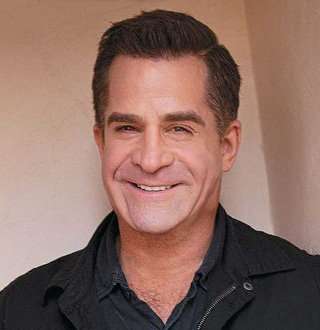 When there were flooding cases of gay youths committing suicide, American stand-up comedian Todd Glass used his profile to come out to the world as gay himself. And that came with the revelation of his mysterious boyfriend of 15 years in 2012.

Todd Glass is pretty known for appearing as a contestant on the second and third seasons of NBC’s Last Comic Standing.

No Mercy In Making People Laugh: Todd Glass ventures into the outdoors to enjoy an evening camp with fellow comedians Zach Galifianakis, Eddie Pepitone and Jon Dore on JASH (Published on 26 September 2017)

You May Also Like: Comedian Craig Kilborn Married To Perfect Being & It's Not Wife, Gay Gossip Raging After Honeymoon

Born on 16 December 1963, Todd Steven Glass was raised in the suburbs of Philadelphia, Pennsylvania where he first started performing stand-up comedy in 1982 during his high school age.

His comical sense led him to appear on television shows like An Evening at the Improv and many Comedy Central stand-up programs.

Todd especially gained recognition after appearing on NBC’s Last Comic Standing’s second and third seasons. Since then, the 54-year-old comedian has regularly appeared on shows like Jimmy Kimmel Live!, Tough Crowd with Colin Quinn, Late Night with Conan O’Brien, and The Dennis Miller Show among many others.

He even had his own Comedy Central Presents special in 2001 and co-hosted the podcast Comedy And Everything Else alongside Jimmy Dore and Stefané Zamorano.

In August 2011, Todd debuted his new podcast, The Todd Glass Show which has been rated the #1 podcast by the Podcasters Association of America. And it shouldn’t come out as a surprise that Todd has an estimated net worth of $1.5 million.

It was in 2012 when Todd came out as gay to the world after reaching his limit on bearing the increasing number of suicides committed by young gay people.

The fixture in the comedian industry was driven by a social responsibility to use his profile as an example and announced that he was gay on an episode of the podcast, WTF with Marc Maron.

I cannot listen to stories about kids killing themselves any longer without thinking (to himself), ‘When are you going to have a little blood on your shirt for not being honest about who you are?’

When he came out as gay; Todd also mentioned that he was in a non-public relationship for 15 years with his mystery partner. And that was something that took people by surprise. 15 years, can you imagine that?

After all this time, you might be guessing that Todd might have already revealed the identity of his gay boyfriend, but to your disappointment, he hasn’t.

In fact, he hasn’t even dropped a small hint if he’s still in a relationship with his long-term boyfriend or has he parted ways with his mystery partner.

You Don't Want To Miss: MATT OX Bio: From Age, Nationality To New Songs & Net Worth

While everything seems hazy about Todd’s gay romance with hidden boyfriend, he did nostalgically mention about his failed relationships in one of his stand-ups. But since the comedian is too greedy to share anything regarding his life with boyfriend, we can only stick with assumptions and stories.