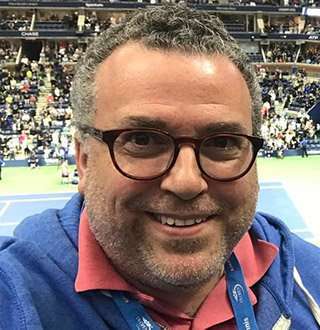 Openly gay journalist David Chalian wasn't letting anything loose on his personal life when his career uplifted. Well, that was until he got married and just couldn't hold back from gushing about his better half.

David Chalian is the political director of CNN, and he is quite known for overseeing the political coverage across every platform of CNN network.

Age of Wordly Savagery: David Chalian talks about how US President Donald Trump should take responsibility for the rhetoric he uses while talking about the organizations and people targeted with suspicious packages (Published on 24 October 2018)

You May Also Like: Steven Ogg From The Walking Dead, Who Is His Wife Or Is He Gay? Details

It was on 20 July 1973 that David Marc Chalian was born to his Jewish and American parents, Robert P. Chalian and Carol Chalian.

Belonging to white ethnicity, he received his education at Marlboro High School in New Jersey and graduated from Northwestern University with a B.A. in the city of Evanston, Illinois.

David, age 45, soon began his career in NY1 in New York City and produced the nightly news program, Inside City Hall. He soon went to work for ABC News as political director and jumped to the position as a political analyst on ABC World News with Diane Sawyer, Good Morning America, and Nightline.

His contribution brought him an Emmy Award as part of the team that produced ABC News’ presidential inauguration coverage in January 2009.

After working as the political editor and on-air political analyst for the PBS NewsHour, David served as the Washington bureau chief of Yahoo! News.

He got fired from Yahoo for making an inappropriate joke about Hurricane Isaac and was hired as the political director at CNN as he replaced Mark Preston.

The CNN political director appears on-air on shows like New Day and The Situation Room with Wolf Blitzer. Considering his contribution to his career, there’s no doubt that David earns a salary ranging more than $145,000 and carries a net worth in millions.

Just like most of the couples these days, the journalist met his better half through the online platform in October 2013 and got married to not his wife, but his husband on 4 November 2018.

David and his gay partner, Justin Tyler Bernstine got married at the Parker Palm Springs in California. Their non-denominational ceremony was officiated by Tom Paris, a minister who was ordained through the Christian National Church.

As an openly gay, David sure doesn’t hold back while showing his love for his gay partner. In fact, they went on a honeymoon and David made sure to share the moment they reached their first destination, Cambodia to his fans. Ain't No Wife: David and his husband smile for a selfie as the two hold champagne glasses (Photo: David Chalian’s Instagram | 26 November 2017)

Look at how adorable they are. David has become more open about his life since getting married and even shared a picture with his gay husband’s whole family on his birthday on Instagram.

Well, all we can say after this is that David is more than happy living his life to the fullest being in a gay relationship with his wonderful partner.