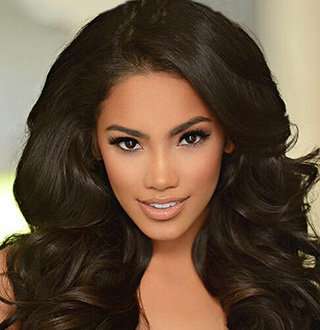 The California-native rose to fame when she got highlighted in the ‘Playboy magazine’ eventually becoming the ‘playmate of the month.' The recognition was more stroked by her relationship with the famous skater, Rob Dyrdek. Moreover, she is also best known as the President of the Iconic Beauty initiative.

Here are some captivating wikis on Bryiana's ethnicity, parents, age, and her wedding with her famous husband.

The Playboy model, who grew up in Salinas, California, with her undisclosed parents, is of American nationality. She belongs to mixed ethnicity of Filipino, Chinese, Spanish, Cherokee, and Blackfoot.

According to wiki sources, Bryiana and her husband first met in 2013 simultaneously after her great stint in the Playboy magazine.

It was love in first sight for both and following their introduction with each other; the duo started to go out frequently. For Rob, their frequent meetings made sure that Bryiana was precisely what his soul mate would be.

On the way to stepping up their relationship, Rob proposed her most romantically that one could ever imagine. To be more rigorous, it was nothing short of a fairy tale.

Having arranged the function before anyone even got a subtle hint, the actor then, made a special entrance riding onto the Aladdin stage at Disneyland, on an elephant.

On top of that, The Romantic Rob then dragged her on stage, got down on one knee, and asked her the lovesome question.

Well, the heartwarming affection supplemented by unique vogue of Rob would make any girl feel special, and it was similar with Bryiana who answered a significant YES to his proposal.

And, the couple got engaged shortly after the proposal in April 2015.

Another Hot Model: Tyra Banks Split Before Getting Married; Photographer Boyfriend Out Of Picture

Rob, who never compromised to go the extra mile for Flores, once again proved his never-dying love for her as he decorated the engagement ceremony taking her off to the Caribbean for an engagement getaway. On the same day, he made Flores his with a gigantic diamond ring as an engagement ring.

The huge age gap of 15 years between the two never really seem to have grown an issue in their relationship as the journey that started with love at first sight finally turned into a wedding ceremony between them.

After a lovely pursuit of one and a half year, Bryiana Noelle Flores walked down the aisle with Rob Dyrdek in September 2015. Wedding Bound: Bryiana walks down the aisle with her husband Rod Dyrdek on 22 September 2015 (Photo: eonline.com)

Above all the eye-catching proposal and engagement, the wedding, however, was a pretty private matter as their close friends and relatives only attended it.

Alongside their blissful married life of more than three years, The couple has been blessed with two children; son Kodah Dash Dyrdek, and daughter Nala Ryan Dyrdek.