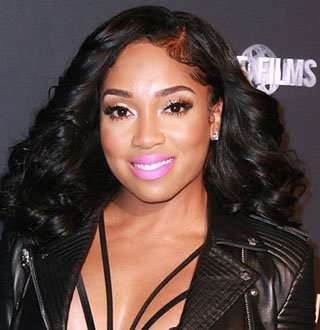 Love & Hip Hop star, Brooke Valentine's most asked questions included  'who's her son's baby daddy?', 'who's her boyfriend or is she married?' Rather than answering the questions, she learned to live with question marks surrounding her personal life. However, the reality star finally got asked the question she desperately wanted: 'Will You Marry Me?'

Speaking of Love & Hip Hop, she's busy creating mayhem and adding layers to her complicated relationship that has seen her go from one co-star to another in search of love.

Born on 5 October  1984, in Houston, Texas, Brooke (real name: Kanesha Nichole Brookes), aged 33, began her musical career as a member of the female variety named Best Kept Secret. However, with a passion for becoming a solo artist burning inside her heart, she left the group and headed to Los Angeles, California where she signed with Virgin Records.

In 2004, she made her debut with the hit single, Girlfight, featuring Lil Jon and Big Boi. A year later, she released her debut album, Chain Letter. The same year, after growing more prominent with every release, she collaborated with rappers, Fabolous and Yo-Yo, on the single-soundtrack, Boogie Oogie Oogie, for the movie, Roll Bounce.

In 2006, Brooke faced a painful chapter in her life, both personal and professional.

After several years of taking a break from music, she returned to the game with an alias name, Brooke Valentine, and released the song, Insanity, in January 2012. The following year, she released a new EP titled Love Letters as well as a single, Don’t Wanna Be In Love.

Despite appearing and winning viewers on the VH1’s popular series, Love & Hip Hop: Hollywood's fifth rendition in June 2017, that was not the only time she had auditioned for the show. She also had filmed scenes for the show in 2014 when she failed to make the final cut of the show.

Why Did Brooke Take Break after 2006?

In 2006, Brooke had one of the worst years of her life. She was working on her second studio album, Physical Education. However, due to the merger of Virgin Records with Capitol Records in 2008, the project was put to hold; which was later released independently in 2009.

2006 was bad for her not just professionally but personally too as she had to deal with a loss in personal front. She had to deal with the loss of her cousin. So, the album not being released on time made her terrible year worse.

In 2010, Brooke gave birth to her first child, a son named London, who was unfortunately diagnosed with cerebral palsy--which is why she took time away from her career to raise her son.

Who Is Baby Daddy Of Brooke Valentine’s Son, London?

Brooke’s son, London, changed her life as she felt like she had been given a purpose and responsibility in life. Waking up to her son’s smile is one of the best feelings she feels because of him. Her love for him is unconditional as well, which is imminent as she paused her career to focus on his health.

In a 2012 interview with Vibe, she revealed some details about the baby daddy and the relationship he and their son shared.

In the interview, she expressed that she shared a good relationship with her son’s father despite not getting married to him. Because he was a very private person, she claimed that she didn’t want to make him public. Although she did not reveal as to who the baby daddy was, it seemed like he is a good dad to their son. Moreover, she also answered whether we'd get to know the baby daddy or not, stating,

“ If he wants to make a statement, he can. But he is very much involved in my son’s life. I was blessed and fortunate enough to meet someone who loves me like I love myself and we created another person that we love so much.”

It seems to get to know the baby daddy is all in his hands.

Brooke entered Love & Hip Hop in 2017 where she was the center of controversy regarding her love life, as she was rumored to be dating co-star Booby Gibson.

After Booby’s divorce with his wife, Keyshia Cole in mid-2017, he was linked with co-star, Brooke Valentine. The pair alongside another co-star, Marcus Black, had a love triangle on Love & Hip Hop the same year.

Although Brooke spoke in details about her rumored boyfriend in an interview with VH1- where she dubbed him as her ‘soulmate’- she revealed that he wasn’t her boyfriend although they were very close to each other.

To those who are familiar with the previous rendition of Love & Hip Hop, it’s a well-known fact that Brooke and Marcus had a thing for each other.

Valentine's Valentine: Brooke Valentine and her boyfriend, Marcus Black share about their affection towards each other in an episode of Love & Hip Hop (Published on Aug 11, 2017)

Marcus, however, had a different take on their relationship as he claimed that he loved her but did not want their relationship to be of that of boyfriend-girlfriend. Brooke, on the other hand, has spoken multiple times about her ‘obsession’ with Marcus.

That ‘obsession’ led the couple getting engaged, albeit on Brooke's mind.

On 24 July 2018, Brooke declared that she was engaged while her fiance had no idea about it. She also revealed during the announcement of her engagement that she wanted to marry him despite him not getting on his knees to propose to her.

The ring she flaunted while announcing her wedding details was presented to her by Marcus in the previous installment of the series.

The couple's complicated relationship was further complicated by the fact that Marcus has been dating another co-star, Stashia.

On Love & Hip Hop's sneak peek released on 8 August 2018 Stashia further confused about their love triangle stating that she was pregnant. However, Brooke showed her obsession with Marcus again as she volunteered to co-parent the baby.

Brooke, after announcing the engagement a month or so, even though it wasn't official, finally saw her wish come true as her 'complicated boyfriend' finally got down on his knees and proposed to her; the reality star now owns two rings from her new-and-official fiancee.

The episode from Brooke's perspective focused on her coy plan to get her self-admitted boyfriend to marry her: She booked a hotel room, a priest, and a one-way flight for his mom--all waiting for Marcus to show up. After her relentless hustling to get married to him, he finally proposed to her!

Although Black's been engaged to Brooke for more than two months, the pair has been hassling lately.

The most recent happening encompasses the Girlfight singer dismissing Black’s request to not work with music producer RoccStar as of his messy behaviors. But, Brooke didn't listen to his fiance and slightly went behind his back and worked with RoccStar anyway.

Alongside the incident, another twist has risen since the episode of the VH1 series that aired on 3 November. Booby Gibson, the ex-husband of R&B artist Keyshia Cole and best friend of Brooke, appeared at the show and popped up at the Girlfight singer’s home expressing his concern about her marrying Black.

To be more exact, Booby now appears as a knight in Valentine’s life and shining armor who’s encouraging her to leave Black for her benefits.

Well, the viewers of ‘LHHH’ as being the witnesses have been giving mixed thoughts about her relationship, but the question that remains a mystery as of yet is--Will Brooke Valentine & Marcus Black Get Married?