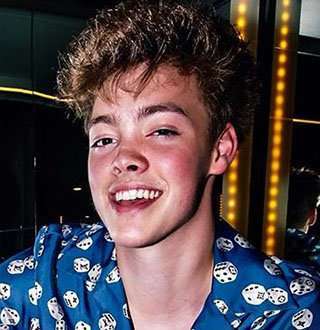 American pop singer Zach Herron rose to fame as an internet sensation. He is a new breed of celebrities who have started their career as social media stars thanks to a huge number of followers on their social media platform, whether that be Instagram or Youtube or Twitter.

Here are the wiki facts of Zach that present his bio, internet and music career, net worth and dating affair with the girlfriend.

The young talent was born on the 27 May 2001 in Dallas, Texas to parents Myta Herron and Josh D Herron. Born into an American family, he possesses White ethnicity.  His family consists of two siblings; a brother named Ryan Herron and a sister, Reese Herron.

Reese, aged seven, is a social media star, sho has amassed more than 170k followers on her Instagram. Zach's mother works as a talent manager for him and also a Senior Gold Independent Ambassador for an e-Commerce site, Plexus.

Browsing their Instagram posts, it is not difficult to trace out that Zach shares the close bond with his parents and siblings. In February 2017, he wished on his mother's birthday, thanking thank her for everything she did for him.

Zach, who stands at the height of 5 feet 6 inches (1.68 meters) used to perform on various talent shows in his high school and even received honors as a member of the choir.

At the early phase of his career, he used to perform on cover versions of popular tracks and upload on Instagram and YouTube. Meanwhile, he gained popularity at the age of 15 after singing Shawn Mendes's song "Stitches" at the school in January 2016.

Within a week, the video became viral and was viewed over 10 million times and shared across social media over 150,000 times. Soon then, he released his debut solo single "Timelapse" and second single, single 'Why.' Herron Squad: Zach Herron performs with his Why Don't We bandmates during the musical tour in February 2018. (Photo:  Zach Herron 's Instagram)

In September 2016, Zach along with four members formed the band, Why Don't We. The band released its debut track " Taking You" on October that year. Their third EP "Why Don't We Just" was ranked as number 1 on the US Heatseekers chart.

Zach has achieved the height of success in social media since his early age. He has accumulated the impressive amount of net worth from his social media and musical stint.

You May Like: Steve Darnell Bio: Age, Wife To Darnell Family, Net Worth & Explicit Facts

Similarly, his revenue from the sales of music tracks also contributes his net worth.

Zach, aged 17 has not flaunted his dating affair with a girlfriend to his fans and followers. Being active in social sites, he has an immense female fan following, who are eager to be his girlfriend and have a single side affair on him.

However, he is yet to find a perfect girlfriend on them to begin a new dating relationship.

The good news is Zach is currently in search of an ideal girlfriend. Talking to IN POP! in March 2018, he stated that it with be good if he finds a girl, who can make him laugh and just make him happy then.

Further, he added that it is meant to be if they connect instantly. It shows that Zach is keen on starting the next phase of his personal life; dating a girlfriend.