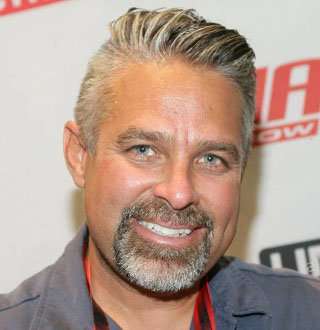 Reality TV star Steve Darnell went from a being small-time rancher to becoming the head of one of the most renowned car customization crew on TV. Rather than pondering on the secrets behind the reality star’s success, his fans were always fascinated with the relationship between him and his wife.

The Montana native’s rise to stardom has been nothing short of meteoric. Starring in Discovery’s hit reality series Vegas Rat Rods, Darnell has been able to win many hearts of automobile fanatics over the years.

Reality Check:- Vegas Rat Rods' very own, Steve shares new insight into the life of a reality star at the 2017 Motorama (Published on 15 March 2017)

Besides Vegas Rat Rods, he also has productions credit on Five Finger Death Punch’s 2014 music video for the song House of the Rising Sun. It is an alternative metal track which is a remake of the original version performed by an English rhythm and blues rock band, The Animals in 1964.

Steve - who celebrates his birthday on 1st of December every year--shares his birthday with the likes of American actress Zoe Kravitz and filmmaker Woody Allen. Information as to his family and more importantly, his age is not a public knowledge.

However, public records show that the Vegas Rat Rods star was born and bred in Billings, Montana. He had earned his high school degree from Skyview High School.

As a teenager, Steve was into the sports of wrestling. It was his high school wrestling coach, Rich Malia, who asked him to take up automotive trades classes after learning about his engineering prowess.

Behind Steve Darnell’s Net Worth

After graduating from high school, Steve ran a ranch in his native Montana.

Later he founded Welder Up in an effort to provide the necessary machinery and equipment for the local farmers.

Fast Forward to 2008 -- His customized 1993 Dodge Sedan was featured on Hot Rod magazine, which further helped raise the profile of Welder Up. Pretty soon after gaining some fame locally, he moved to Los Angeles. His company would continue to reach new heights in terms of popularity after being approached by a Canadian production company about a show based on Welder Up.

The show - which would eventually become Vegas Rat Rods - was originally picked by the Canadian branch of Discovery but later taken over by its US parent company. Vegas Rat Rods is in its fourth season now, with season four slated to drop in November 2018.

As a part of the TV deal, Steve was asked to relocate his company to Las Vegas. Interesting enough, his shop is four blocks down from Danny Koker’s shop Counting Cars. Over the years Steve and Danny have maintained a cordial relationship as evidenced by the 2015 Review-Journal interview, in which the former said:

I know Danny a little. He’s a great guy. We get along great.

Considering how Danny was able to assemble a net worth of $13 million, Steve’s net worth ought to be in the same range as Danny’s. He is not only the regular mechanical engineer who fixes up cars.

According to his experience, skill, and creativity, he can charge customers large sums of money for customizing the vehicles according to their requirement for them. Rumour has it that the Montana native charges somewhere between $80k-$100k for his services.

The Montana native has two teenage sons: Chase and Kash. Dubbed as the future fabricators of the Welder Up team, Steve sons’ have been a regular feature on Vegas Rat Rods since 2014. Family First:- Steve and his sons, Chase and Kash pose for the camera in their shop Welder Up, located in Las Vegas (Photo:- chasillacsnaps.wixsite.com)

The relationship between the sons and father not only exist within their profession. Both his sons regard their father, Steve as a source of an inspiration. Back in 2013, his son Chase shared the throwback picture with his father, matching the qualities with him.

Chase and is younger brother shares a close-knit relationship between them. They frequently share the pictures together on their respective social sites that comprise of enjoying their moments together and throwback childhood pictures.

Back in November 2016, Chase wished his brother, Kash on his birthday mentioning him as his best bud. As a father, Steve prefers to spend the spare time with his sons, visiting various exotic sites.

On the other hand, his wife remains an enigmatic figure.

This leaves fans of the show with much room to speculate. As far as they are concerned, either Steve is hiding his wife or he never had one. The latter speculation dictates that the Vegas Rat Rods star's so-called wife is a mere surrogate.