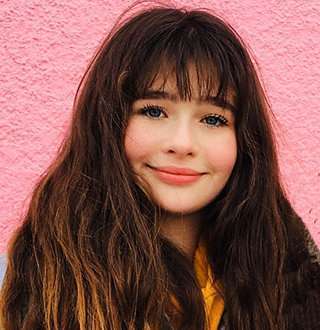 German-American child actress Malina Weissman's display of affection to her family members on social media proved that she had been sanctified with the most loving family of all.

Malina is a child actress best known for portraying young April O'Neil in 2014's movie Teenage Mutant Ninja Turtles and Violet Baudelaire in the Netflix series A Series of Unfortunate Events. She is also a model working with big-time brands such as Calvin Klein and Ralph Lauren.

Goosebumps: Malina and fellow co-stars Neil Patrick Harris and Louis Hynes Wrap feature in the trailer for the season 2 of A Series of Unfortunate Events (Published on 7 March 2018)

The latest installment (season two) of A Series of Unfortunate Events was aired on 30 March 2018.

Following her model mother’s steps, Malina signed her first modeling contract at age 8, to the same agency her mother had modeled for in 2011.

Malina, who wanted to be an actor from age 2, has appeared in significant designers and brands like Calvin Klein, Ralph Lauren, Levi's, Benetton, DKNY, H&M, among many others.

She made her film debut playing the role of young April O’Neil in the science-fiction action-comedy film Teenage Mutant Ninja Turtles in 2014. Megan Fox played the adult version of that role in the movie. Later in 2015, she landed the part of Young Zor-El on CBS and Warner Bros. Television's superhero series Supergirl.

After that, Malina appeared in several films like Thirsty and Nine Lives. As an actress, she also performed in commercials for ACT mouthwash, Maybelline, Purell, and My Little Pony.

In 2017, Malina was cast in the lead role of the Netflix series A Series of Unfortunate Events - a drama-comedy web TV series based on Lemony Snickets book series of the same name - as Violet Baudelaire.

The first season of A Series of Unfortunate Events was premiered on 13 January 2017. Creators of the show, Mark Hudis, and Barry Sonnenfeld have confirmed that the show will end with the release of its penultimate season, which is slated to be released in late 2018.

Soon after the release of the second season of the Netflix original series, rumors of Malina dating her co-star Louis began to spread like a wildfire. But it was later learned that the pair were just friends.

Malina's rumored boyfriend/co-star Louis Hynes, on 11 May, peened an emotional post on Instagram addressing the end of the popular teen series. In the post which accompanied a picture of the whole crew, the caption read:

That's a wrap on ASOUE. I cannot thank the cast and crew enough for all of the incredible work they have put in to the show I have grown up on. I will miss all of you! It was so surreal to say goodbye and I still can't quite believe it's all over! What an amazing way to spend the last three years of my life. So much love for all of you

She has received lots of attention and admiration for her portrayal of Violet.

Malina was born on 12 March 2003 in New York City, NY. The 15-years-old child actress is a loving daughter to her parents who wholeheartedly supported her in her mounting career.

As of her siblings, she has an elder sister named Ayla Weissman. Ayla is quite popular on Instagram, where she posts fashion, lifestyle, and selfie photos to her eponymous account. The family of four live together in New York.

Talking about her love life, she is reportedly single with no signs of a boyfriend. There is no dearth of love in her life as she has been blessed with an adorable family.

Melina Weissman Shares Same Birthday With Sister, Not Twins Though

Malina, an animal lover, loves to express her fondness towards her parents and sister through her social media accounts. Back in May 2017, she wished her mother a 'Happy Mother’s Day' through a heartwarming picture on Instagram. Similarly, a month later on June 19, Malina wished her father a 'Happy Father’s Day' mentioning him as the coolest dad ever via an Instagram post.

Lately on 12 March 2018, Malina celebrated her and her sister’s birthday in an exceptional way revealing that they both were born on the same day just three years different. She shared some childhood pictures of them and wished her a very beautiful birthday stating her as the best sister ever.

It's evident that Malina doesn't feel shy to shower her love toward the family members on her social media.