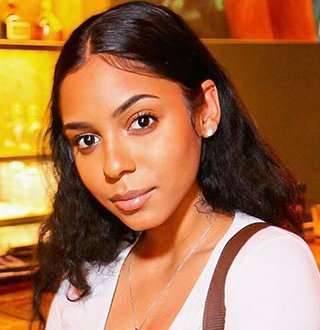 After contributing to Lil Yachty’s hit track, All In, Kodie rose to prominence and started to drop a few solo songs of her including her breakthrough mixtape, 2060 and an EP dubbed, Little Rocket.

Here are some riveting wikis about the up and coming hip-hop artist ranging from her love for music to her lesbian lover, and her latest album:

Born on 28 October 1998 in Atlanta, GA, as Kodie Williams, She was raised in Chicago.

Kodie grew up in a musical family. Her father, Danny C. Williams, was a band member of Detroit trio Rick, Ran & Dan whereas her aunt, Cherrelle is famous for her song, I Didn't Mean to Turn You On.

Her sister, Brandi Williams of R&B trio band, Blaque; and finally her mother is her manager.

Kodie started making music herself at the early age of 14. She initially worked as a writer for the Atlanta production studio, overseen by rappers, D.Clax and Matty P.

Her first creation was Crown Me- a track that she went on to upload onto Soundcloud. Impressed by her skills, Matty P decided to show her music to his friend and associate Coach K, the music executive behind famous hip-hop artists, Gucci Mane and Migos.

Coach K later decided to mentor her. A couple of years after, he introduced her to Lil Yachty, the hyper-melodic rapper, at Atlanta’s Masquerade club, where the two quickly bonded.

Shane collaborated with Lil Yachty on the single, Sad, which earned her more street creds. Since then, Shane has come out with several other songs including Start a Riot, Hold Up (Dough Up), Can You Handle It and Drip On My Walk. She also released her latest album, Back From the Future, in 2017.

Kodie Shane enjoys the net worth of $100,000. Being the only female member of Lil Yachty’s Sailing Team has seen her gain experience as well as income from her songs and contributions.

The love story between Kodie and Skye was like many love stories--written before it even began. No! Not by god--but by the rumor mill.

Skye was working on a song when her producer came and adviced her that the music would play song better with a feature. She wanted someone fresh, skillful and her producer suggested Kodie. Since Skye was already following Kodie, she decided to message her through Instagram.

You May Like: Colin Morgan, On-Screen Gay Role A Curse? Or Married Girlfriend In Real Life? Day Of Love: Kodie Shane gets all cozy with her girlfriend, Skye Morales on 15 February 2018. (Photo: Skye Morales's Instagram)

After that, they hit it off quickly and soon enough, they started dating and became girlfriends.

Skye Morales revealed the story of how they met on YouTube video uploaded by  DJ Smallz Eyes 2, on 24 October 2017.

On 17 August 2018, Kodie Shane uploaded her latest song called Sing To Her.

Since the release of the song, she has been interacting with her fans and had an innovative way of promotion of her song. She proposed a challenge following her song's release, which stated that if you were the real supporter, they were to scream “go listen to that new Kodie Shane shit” in a public place.

She also had an incentive to her followers who took up the challenge, as she claimed that she'd repost all challenges and whoever had the best one would get to FaceTime with her.

The song has received an overwhelming response in social sites and very positive reviews on her Youtube channel.

In an interview with WWD on 17 August 2018, Kodie could not hide her excitement as her first studio album was due in September 2018.

She revealed that her debut album is a compilation of music that she had written throughout her teen years. She said,

I’m about to be 20 in October, so it’s just growing up and growing out. I’ve been making this album my whole life. I want it to be so big I don’t even need to drop another album. Like Lauryn Hill.

Her song, Sing To Her, a part of that album is supposed to be a teaser for what to expect from her new album! And reflecting on her first single, it is worth waiting.