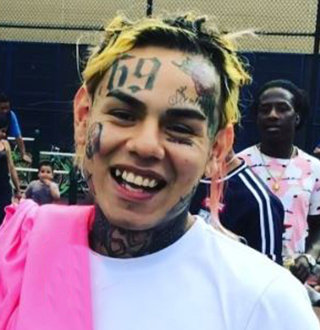 Famous American Rapper Tekashi 6ix9ine life resembles with a coin--on its head side is the popularity he's managed to gain from his influential rapping career-- on its tail side, the controversies he's been facing all along his life.

The Brooklyn-native is still specified as “underground” artist but one of the fastest-rising rappers. He was thrust into the limelight following his track Gummo, which became his first Billboard Hot 100 entry, peaking at number 12 on 8 October 2017.

Crazy, But Thats How It Works: Learn more about Tekashi 6ix9ine; his childhood, his controversies (Published on 25 November 2018)

Besides, Rapper 6ix9ine is very active on social media, where he keeps on doing crazy things with girls and his assets.

Who Is Rapper 6ix9ine's Girlfriend?

Although he's seen hanging out with girls on social media, Rapper 6ix9ine was on the speculations of being gay; maybe because of his looks.

However, all those gay rumors were short-lived, as it was known that he is dating a girlfriend named Sara, with whom he also shares a daughter named Saraiyah.

About his relationship, his girlfriend Sara, coming live on Instagram, stated that she has been sharing an on-and-off relationship with him even though she was happy with his protectiveness. She also added,

“Me and him going at it all day until I just leave him, and that’s when he [sic] suffers.”

But when it comes to his daughter, he shares a healthy relationship with her. So, let's dig in to know more about the father of a daughter, Rapper 6ix9ine.

Born on May 8, 1996, as a native of Bushwick, Brooklyn, New York, US, to mother from the Mexican background and father from the Puerto Rican origin, Rapper 6ix9ine, real name Daniel Hernandez had to share a reasonably rough childhood.

After his father’s death, being the only son in the fam, all the responsibilities came up to him as he had to help his mother financially. What's more, he was even expelled from his school when he was 8th grader. To support the family, Rapper 6ix9ine then worked as a bus-boy, then at a bodega (street works).

However, due to the absence of good parenting ever since his early childhood, the Brooklyn-native started dealing weed (drugs) peddling. Slowly he made it his only profession, but such anti-social activities are not meant to be done any day.

And he was once arrested for selling heroin in front of a store and for beating up the store owner. Although he served some part of his jail sentence, he managed to escape the long prison-term as his case was regarded as minor.

Despite early setbacks as Daniel Hernandez, Rapper 6ix9ine was able to manage a blissful career out of nowhere.

The power of music is ameliorating. In the modern generation, expressing through lyrical music has been very influential for young peoples.

Daniel Hernandez, widely known as 6ix9ine, as similar to that, may have had a lot of struggles, may have been involved in harmful activities growing up but he took all the experiences it to writing raps and making his tracks;  he believed music would help him to amend which worked out for him.

It was in 2016; he initiated his musical career first collaborating with Bodega Bamz.

As being a kid in his early teens, he didn’t have an official account on social websites; YouTube and Soundcloud, so he released all his tracks through a Slovakian label. Lucky for him, his works were appreciated; he started swamping a lot of followers. And it was precisely when he named himself Tekashi 6ix9ine.

And on 8 October 2017, he made a massive breakthrough in the music industry with his first ever breakout single ‘Gummo.' It made to number 12 on the ‘Billboard Top 100’ and had recorded over 100 million views on YouTube.

Alongside 'Gummo,' he also released two more songs ‘Kooda’ and ‘Keke,’ which helped him garner even more fame.

Ever since then rapper 6ix9ine has never had to look back, as he's established himself in the industry signing to Interscope records.

Although he's accumulated a lot of successes as a rapper so early in his age, Daniel has not been able to move on from his childhood habits, moreover, has never failed to create controversies from his activities.

He has some alarming criminal charges against his name from being robbed, to being charged for robbery.

In early 2015, he spread all over the news after he had uploaded three videos on his Instagram, wherein he and another male were seen with a minor girl of 13-14 years of age.

Later in 2017, speaking about the case in an interview with ‘DJ Akademics,’ he stated that he was just 17 when the incident happened and he had deleted the video.

However, his claim was short lived as he failed to provide substantial proof to support his claim.

After he was pled guilty, he was ordered to complete his GED. If he had failed to obtain GED, he would have been at the risk of facing a jail sentence.

Lucky for him, he somehow managed it.

Not long after the shutting down of the video-case, Rapper 6ix9ine has once again spread like a wildfire all over the news as he arrested on 20 November by federal agents after being charged with a litany of crimes, including armed robbery, conspiracy to commit murder, and drug distribution.

Moreover, he is all set to face 32 years jail sentence.