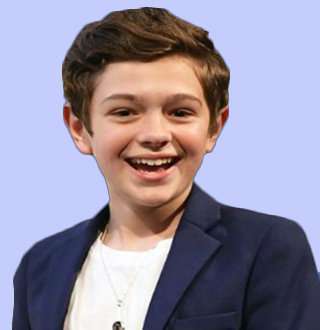 Having his parents in the showbiz meant a smooth transition to Hollywood for Noah Jupe. Noah, walking the well-trodden road made by his family, was ably supported by his family in his quest for stardom.

The teenage actor's career started on the small screen with Penny Dreadful and Downtown Abbey in 2015.

However, his coming of age series was The Night Manager, which was lauded by many critics as the series ever made, and his role was widely appreciated.

After establishing his acting potential with the multiple award-winning series, Noah's career has been continuously on the rise.

The actor, with the height of 4 feet and 5 inches, was cast in a full feature film for the first time The Man with the Iron Heart in 2017.

He also appeared as one of the leads in George Clooney directed dark comedy Suburbicon.

And it was with the recommendation of George; he was cast on the horror flick A Quiet Place. Both the critics and audiences widely appreciated his acting in the well-appreciated horror flick.

In an interview with Screenrant, Noah claimed that despite being frightened to watch horror movies, he had loads of fun filming it.

What's more, he was full of praise for his co-star Millicent Simmonds, who had done a stellar job despite being deaf and unable to speak.

As of now, the young actor is busy working as a young Shia Labeouf in Honey Boy. He also has movies Ford V Ferrari and Holmes and Watson in post-production scheduled to release in 2019.

The movies Noah has appeared in have all been critically and commercially successful. The commercial success has been reflected in his net worth as he is supposed to be one of the wealthiest teens under the age of 15 in the world.

With a plethora of movies in the pipeline, Noah is undoubtedly set for a considerable windfall boosting his net worth by numerous folds.

Born on 25 February 2005, as the eldest son to the jupe family, he has two siblings, a brother, and sister. The young actor had a readymade path set by his family for him to tread into Hollywood.

Will Noah be starring In Sequel To A Quiet Place?

When A Quiet Place grossed an impressive $340.7 million in 2018 on a budget of only $17 million, director Krasinski was asked whether he had gone to filmmaker fellows about how to land a successful sequel.

Well, he didn’t, because he never went to ask anyone for similar advice on the first one as well as he said in an interview,

If I start focusing on something I have never done before and asking people how they did it, then I’ll dilute the experience. I don’t even see it as a sequel.

His wife, Emily suggested that it wasn’t a sequel but the second book in a series of books. It is apparently ‘a widening of a world.’ And people had been curious if Noah and Millicent Simmonds would be appearing in the second installment.

And there’s been a hype about the family making it out alive from the world that they have accustomed to in the movie. It hasn’t quite been decided what they’ll be doing with the second part of the movie, but fans are hoping for the return of the family of four.

Both Parents Are Into Hollywood, Provide Inspiration & Support

Noah's parents are both well-established names in Hollywood. His mother Katy Cavanagh is an actress and was a series regular in one of the longest-running soap opera Coronation Street before deciding to leave Corrie in 2015. His father, Chris Jupe is a movie producer.

With the support of his family, Noah was able to start his career at an early age of 10, appearing in series such as  Penny Dreadful and Downtown Abbey. Having both his parents in the showbiz meant Noah had not just one but two role models within the family to follow. With long working experience in the Hollywood, his parents have helped Noah to take up the right projects at the right time.

Furthermore, his parents are his critic number 1, letting him know where he could improve in his quest for the top. And flanked by such supportive parents, there is no doubting sky is the limit for the young actor.