PnB Rock’s death has sent shockwaves around the rap community. The rapper, 30, was shot dead on September 12, 2022, during a robbery at the Roscoe’s House of Chicken & Waffles restaurant in South Los Angeles.

A lot of reactions have since surfaced about his death, with big names in the rap community as well as his fans taking to Twitter to share their feelings about the incident.

And while a lot of that has been condolences for the now deceased rapper, a few have made wild allegations against PnB’s baby mama for causing the tragedy.

Kodak Black has been, until now, one of the biggest names to have spoken up since the news of PnB’s passing surfaced. And his first reaction was outrageous and headline-making.

Black went straight to his Instagram stories to write a few sentences on PnB’s death. He talked of how he was with the now deceased musician just the previous night and how they were talking about his comeback in the music scene.

Then, in an outrageous claim, he implied that PnB’s baby mama, Stephanie Sibounheuang, was responsible for his death. 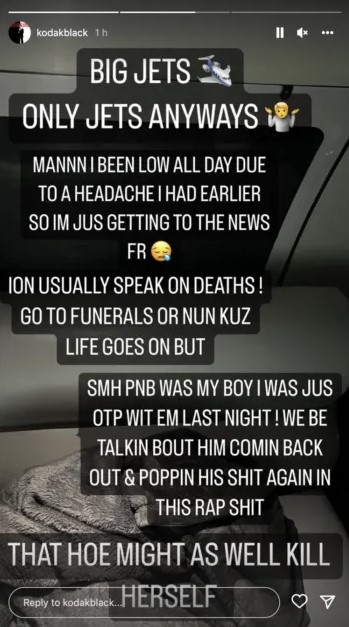 This allegation comes after speculations about how Stephanie might have leaked his location and that his murder was made easier with her revelation.

Stephanie had uploaded a geo-tagged picture of the couple, who were getting food at the Roscoe’s House of Chicken & Waffles restaurant just a while before the attack happened. This location clue, many think, was the reason PnB became an easy target for the robbers.

Cardi B and Nicki Minaj Pitch In on the Situation

Nicki Minaj and Cardi B became the next few big names to pitch in on the situation. They had different takes on the blame Black had levied against Stephanie.

“I highly doubt nikkas was looking at PMB’s babymom IG,” Cardi B wrote on her tweet, implying she did not believe it was Stephanie who was at fault for the crime and that it was just happenstance.

I highly doubt nikkas was looking at PMB’s babymom IG. He was in a bad location and people stay outside plotting. It’s very irresponsible and inconsiderate to blame her for something so tragic. We should be sending nothing but love to her and his family at this time. — Cardi B (@iamcardib) September 13, 2022

Minaj, however, seemed to agree with Black on the accusations.

In her first tweet, she seemed to imply that there was no way any rapper or their loved ones were posting their whereabouts after Pop Smoke’s death.

After Pop Smoke there’s no way we as rappers or our loved ones are still posting locations to our whereabouts. To show waffles & some fried chicken????! He was such a pleasure to work with. Condolences to his mom & family. This makes me feel so sick. Jesus. #SIP #PnbRock ðŸ•Š — Nicki Minaj (@NICKIMINAJ) September 13, 2022

And in her second, she said people around successful rappers had much to gain, possibly pointing fingers at Stephanie.

The ppl around these rappers gain so much. It’s time to start really reminding them over & over!!! At least TRY to put your foot down if you CARE! Tell them!!! You’re not loved like you think you are!!! You’re prey!!!! In a world full of predators!!!! What’s not clicking???!!! https://t.co/wpfxtnkBU6 — Nicki Minaj (@NICKIMINAJ) September 13, 2022

There is no shortage of people on both sides of this allegation, evident in the replies to these tweets and others.

After the news of PnB’s death became public, DJ Akademiks posted a video from one of the rapper’s conversations from a week ago.

A week ago.. PNB Rock talked about a prior situation where he felt some people were trying to do something to him. pic.twitter.com/3l2xPELGlS — DJ Akademiks (@Akademiks) September 12, 2022

In the video, he said he had an encounter during the pandemic and implied his life was in danger.

However, Akademiks also became the voice of reason in all of this. In another tweet, he said people should not be passing the blame to anyone else but the person who killed PnB’s demise.