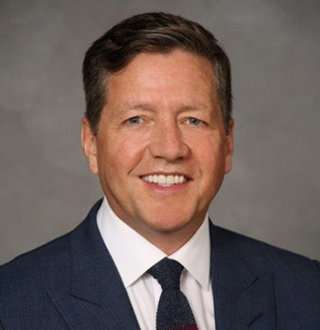 The chief executive of MarketAxess, aged 58 had his bio updated from single to married as he whispered, ‘I do’ to ABC's host, Lara Spencer on 1 September 2018 in an outdoor wedding ceremony in Vail, Colo.

The bride crossed the aisle accompanied by her 16-year-old son, Duff Haffenreffer, while Rick waited for his wife to walk up to him.

You May Also Like: Hallie Meyers-Shyer & Boyfriend Engaged! Years Of Dating Leaps To Wedding

As a cliche with any other weddings, this wedding also had a slight trouble with the bride’s gown, which was delivered at the last moment when Lara ordered the dress to be made in a week. Luckily, there was enough fabric for her dress, so it didn’t take long for the gown to arrive.

The dress was made by designer, Adam Zohar in mermaid style with a high neck and open back with the lace flowing at the bottom which had handmade lace flowers sewn.

Rick looked as dashing as any groom in a cream blazer, black pant, accompanied by a matching bowtie. Just Married: Rick McVey with his wife, Lara along with People’s Jess Cagle and his husband, Matt Cagle at the ceremony on 1 September 2018 (Photo: Matt Cagle’s Instagram)

Nature was the backdrop for the wedding as it was held outdoors, under a tent which was elegantly decorated with hanging Chinese lanterns inside. The family shared huge smiles and excitement on the joyous event.

Lara who is 10 years younger than her husband in age, walked down the aisle with her son while the song ‘A Thousand Years’ by Christina Perri played in the background. Ties That Bind: Lara posts a picture with her then-fiance, Rick McVey on a bike ride on Instagram on 31 August 2018 (Photo: Lara Spencer’s Instagram)

The pair had met for two years when Rick went down on one knee and presented out the ring to Lara in January 2018.

Rick and his newlywed wife, Lara Spencer both have kids from previous relationships. According to the wiki, Rick has three daughters, and Lara has a son and a daughter.

Lara, garnering a net worth of $6 million was previously married to the real estate broker, David Haffenreffer but the pair subsequently part ways in June 2015.

Before the wedding, the newlyweds conducted a wedding planning weekend as they enjoyed a concert of Eagles cover band and went to devour the enthralling beaches of Mykonos, Greece together in June 2018.

Rick McVey is an American entrepreneur and the Chairman and Chief Executive Officer at MarketAxess, a financing company that operated an electronic trading platform all over the world.

The tech guru founded the company in 2000 and has ever since served as the chairman and CEO of the company and has seen the company grow from a small trading firm to a giant in tech-field and is now worth more than $8.5 billion.

Prior to MarketAxess, he had served for acclaimed accounting firm JP Morgan, having completed his MBA from the Indiana University.

The tech guru is one of the best-paid CEO in the world and in 2017 his remuneration package was revealed to be more than $ 5 million including his salary, bonuses, and stocks. He is thought to have a net worth in billions thanks to his huge stakes in MarketAxess.

The husband of Lara Spencer is a recipient of numerous awards including 2012's National Entrepreneur Of The Year for Financial Services, and he was also included in the Tech 50 list of 2016.