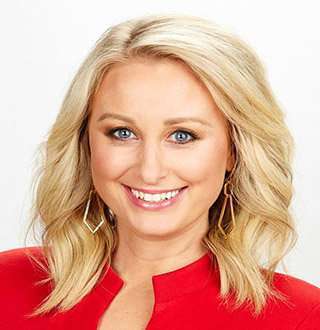 Australian meteorologist Jane Bunn shares more than a decade of marital relationship with her husband. The only thing they were lacking in their married life was a child. And around 2017, it was speculated that she was pregnant. So, how true are the speculations?

The Melbourne native currently appears on the Australian highest-rating Seven News Melbourne, presenting the weather news. She is a weather contributor on various networks such as Today and 3AW covering weather events that include the 2009 Victoria's Black Saturday bushfires and the 2010-11 Queensland floods. The charming weathercaster was born on 2nd August 1978 in Melbourne, Victoria. She is the eldest of three sisters in her family. Her parents got separated when her youngest sister was six weeks old, so she grew up with her mother, Bev Jennings in an all-girl household

Standing at the perfect height, Jane possesses an enchanting beauty which allures her viewers.

Jane, at the age of 27, earned a bachelor's degree in Science at the Monash University in 2005. She was one of nine students from Australia, who was selected in 2006 to undertake a Graduate Diploma of Meteorology provided by the Bureau of Meteorology.

Jane has been serving as a weather forecaster for more than a decade. She has earned the remarkable salary and net worth for her long stint of work as a meteorologist.

She began her career as a weather forecaster initially based in Sydney, Canberra and finally at RAAF's Williamtown base. She accomplished a major breakthrough in her career after assigned a role as the morning meteorologist at The Weather Channel in 2008.

From 2009 to 2014, she presented the weather news at WIN News Victoria. After leaving the network, she became a fill-in weather presenter on ABC News Breakfast and ABC News Victoria.

As of now, Jane has been serving as a weather presenter on the Seven News Melbourne, joining in 2014.

Jane Is Married To IT Consultant Husband, Michael Bunn For Decade

Jane currently shares the marital relationship with husband Michael Bunn. Michael is an IT Consultant by his profession.

More On Australian Celebrity: Sharna Burgess' Boyfriend & Husband To Be; Bobby Bones Or Someone Else?

The couple got married in 2005 but they kept their wedding details a secret. However, Jane occasionally shares the glimpse of her relationship with her husband on her social sites. In December 2016, she was spotted enjoying a vacation with her husband and family at Sorrento, Victoria, Australia. The couple also enjoyed the weekend touring the Werribee Gorge State Park in Victoria in April 2017.

And it's for sure that, the couple shares the same love they had a decade back.

Well, it has already more than a decade of their wedding but the couple is yet to add a new member in their family. Jane is yet to share the delightful news of being pregnant.

You May Like : Is Kate Bolduan Pregnant? Family Person With Husband - Life Behind Camera

However, some of her fans and followers were bewildered by her rapid weight gain in 2017. Her followers on Twitter even asked whether she is pregnant because of her rise in weight.

But unfortunately, the fans were left disheartened. It seems like she is in no hurry to welcome a new member in her family.